Eastbourne’s Congress Theatre has been shrouded in scaffolding for the last three years since lumps of concrete started to drop off the grade two star listed frontage. Council officers presented the Lib-Dem Cabinet with a report detailing various options on how to respond and the bungling Lib-Dems opted to do nothing whilst ambitious plans were drawn up for redevelopment of the wider Devonshire Park site. 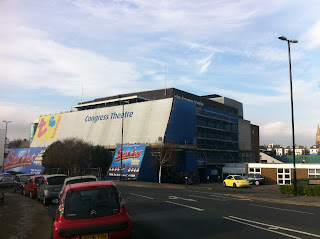 Conservatives said that essential repairs costing just over £133,000 should be completed immediately to keep costs down and ensure that the Theatre did not become an unsightly eyesore in this key tourist area of our town but the Lib-Dems ignored this. Three years later, hotels and attractions are finding it harder and harder to justify the monstrosity, scaffolding costs alone have exceeded the cost of the original essential repairs and the further exposure of the damage to the elements has caused a deterioration in the structure of the building.


The Grade Two Star listed status places strict limitations on how the building should be preserved and maintain with no changes to the way the building looks permitted but under recent questioning, the Lib-Dem administration boasted that their snails pace consideration of what action to take had lead to a revolutionary new repair process to become available which will provide a far longer lasting repair than would have been possible three years ago although no details of this new technology have been provided to date.


In an alarming new development, the Lib-Dem Cabinet has now approved a staggering £850,000 repair plan for the frontage of only the two upper floors of the Theatre, choosing to leave the lower floors until such a time as they may get round to further development work in the area with no firm details of why the costs have gone up so much or how such repairs will be funded by tax payers.


Cllr Philip Ede (Shadow Cabinet Member for Tourism) said “I find it staggering that with our local economy so dependent on tourism and the thousands of jobs that provides, the Lib-Dems can neglect such a major part of our tourism offer in this way, and totally unacceptable that it is likely that the repairs may not be completed for a further two years”.


Cllr Patrick Warner (Chairman of Scrutiny & Conservative spokesman on Asset Management) said “the drastic hike in repair costs is extremely concerning, even more so given that we will only see a partial repair in the first instance and the source of funding remains so unclear exposing residents to substantial risks”.
Posted by Cllr Patrick Warner at 08:36