We’ve been waiting such a long time for this car and there’s a lot riding on it. The MG6 was launched amidst a sense of quiet optimism at Longbridge in May 2011 but, very quickly, it established itself as a slow-seller. Many people blamed the lack of marketing and publicity; and even more decried it for the lack of a diesel. However, from December 2012, MG Motor UK will be taking orders for its new 1.9-litre DTI-Tech-engined ’6 turbodiesel – will it finally see a turnaround in the car’s fortunes?

Considering one of the car industry’s best-known badges is nailed to it, the MG6 has singularly failed to capture the collective imagination of the British car buying public. Since it went on sale in early 2011, fewer than 1000 have been sold in what is considered its ‘home’ market but MG is hoping that this is about to change now that a new diesel engine joins the line-up alongside the 1.8-litre turbocharged petrol version.

The good-looking MG6 is roomy and has excellent dynamics – and, as long as you don’t choose one of the top-of-the-range models or the Magnette saloon (only available in TSE form and costing £22,000), it’s also good value for money compared with its more established price rivals. Unfortunately, with an engine range of one – the 158bhp 1.8-litre turbocharged TCI-Tech – and in a market sector where diesel is king, this is clearly a major handicap.

The arrival of the new diesel version therefore comes not a moment too soon. The all-aluminium twin-cam 16-valve oil-burner is the result of a joint venture between Kunming-Yunnei and SAIC Motor and it has been extensively developed by the Engineers at the Longbridge-based SAIC Motor UK Technical Centre who have worked hard to optimise the new engine for the MG6.
The MG6 DTI-Tech will be assembled in the UK in Longbridge from kits imported from China and, as before, the car was originally designed in the UK and has been significantly reworked over its Chinese counterpart to be suited to Europe’s demanding car buyers.

The MG6 is an interesting package and very much a segment-spanning car. In terms of price, it’s clearly a C-segment (Focus/Golf) alternative but, with its generous length and interior room (especially in the rear), MG clearly believes that it actually belongs in the class above. The two cars the company sees as its closest rivals are the Skoda Octavia and Vauxhall Insignia. Significantly, both of those offer a much wider choice of engines than MG’s two…

The interior quality has taken a step-up since the petrol-engined car was launched, showing that the MG6 is still a work-in-progress. Former nastiness, such as low-grade steering wheel and gearknob have been replaced with new items and, overall, there’s now an air of solidity within the cabin that wasn’t there before. In the SE model (£18,195) we tested, equipment levels are generous – you get integrated sat-nav and multi-media in-car entertainment, rain sensing wipers, speed limit warning system, cruise control and parking radar. Standard-fit 17-inch alloys also look smart.

The driving and pedal positioning are also excellent, but that is tempered by poor rearward visibility and an intrusive A-pillar. The cabin ambiance remains dour, thanks to dark trim, while the ignition ‘key’ is still needlessly lightweight and the handbrake is awkward. Overall, though, it’s not a bad effort and not really deficient in any area - the interior is easily the MG6′s weakest feature.
On the road, the MG6 is transformed. Although the petrol option remains available, we can’t see many people taking it now. The 148bhp engine delivers a useful slug of torque – 258lb ft – and this is absolutely necessary to pull what is a very hefty car, weighing-in at between 1595-1605kg depending on the model. Trickling through the city, all the controls feel well-weighted and progressive and smooth driving comes naturally (unlike the petrol car) – stop-start is a welcome addition; a system that benefits from the MG6′s new regenerative braking system.

However, you are seldom aware of the MG6′s great weight – it accelerates well (0-60mph takes 8.9 seconds, maximum speed is 120mph) and pulls smoothly between 1500 and 4000rpm. The new six-speed gearbox carries a super-tall top ratio (at an indicated 70mph it’s pulling 1800rpm), but the intermediates are well-judged and rarely will you fall outside of the power band.

Refinement levels are okay – the engine note is slightly course, but never intrusive, and it’s at no real disadvantage compared with its diesel opposition, even if it’s never exceptional. As before, wind noise levels are okay, and tyre noise is well contained. But the MG6 does track well on the motorway and the damping is spot on for high speed driving. It’s here that you’d assume the most development work has been done.

That said, get the MG6 on to an empty A- or B-road, and it’s a genuinely engaging handler – with crisp steering turn-in and almost no body-roll. The ride is firm, but well-damped, too – and rarely will a challenging road upset it. What stops the MG6 DTI earning a top rating for its dynamics are the brakes – although it has bigger discs and the initial bite inspires confidence, it lacks ultimate feel and that nibbles away at a driver’s confidence.

The new electro-hydraulic steering is well-weighted and the gearing is perfect but, disappointingly, it doesn’t quite communicate road surfaces with the same clarity as the old hydraulic set-up.
The MG6 GT 1.9DTI SE is, then, a good car – one with a character that we can’t help but like. It’s also a great effort from MG (effectively a car company that’s been around something less than 10 years) and certainly feels like a far more convincing all-rounder than the petrol-engined version. Whereas in the original ’6, you’d find yourself making allowances – be it for the ageing engine or some of the low-rent Chinese componentry – this car feels much more together and harmonious and, although it’s not at the cutting-edge, it is there or thereabouts in most departments.

MG doesn’t have huge sales ambitions for this car, looking at between 1500-2500 sales per year, which, following on from the disappointing sales so far, is probably a realistic goal. It’s targeting business users and fleets, promising low servicing costs, favourable taxation (BIK rather than a headline-grabbing low tax band – which at 139g/km is disappointing) and cheap insurance. The company predicts that 75 per cent of its sales will go to business users and promises that there will be more marketing for the car, which far too few people actually know about at the moment.
Overall, the diesel-engined MG6 is a good effort and, if you go for an entry level ‘S’ model at £16,995, you’ll end up buying a likeable, good value, fun-to-drive, roomy family hold-all, with plenty of pace and a real-world potential of 45mpg all day long. It also has the important stuff, such as the safety kit, air conditioning, all-round electric windows and alloy wheels. Wonder when we’ll start seeing more of them on the road? If there’s any justice, very soon. 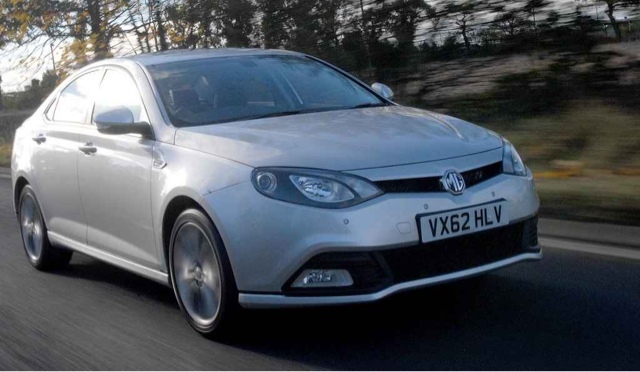