Pensioners now know that they cannot trust the Lib-Dems

So now we know beyond all doubt that you cannot trust Nick Clegg and you cannot trust the Liberal Democrats after listening to some of their batchy ideas at the Brighton Party Conference this week and to be honest I suspect that for many people out there in the real world, sorry just won't cut it!

Nick, Vince and the gang despise percieved wealth so much (even though I suspect many of them would be considered to be fairly well off by most of us mere mortals) that they have come up with a range of plans that include cutting winter fuel payments to pensioners, withdrawing their bus passes and clobbering them with additional taxation if they happen to live in a house that they deem to be valuable.

Nick Clegg even cited the unfairness of pensioners bus passes by saying that it was not fair for hard working heavily taxed younger people to have to pay for Sir Alan Sugar's bus pass. This really does demonstrate just how little he understands about the scheme. You don't have to be a rocket scientist to work out that whilst Sir Alan and many other wealthy pensioners may be eligable for a free bus pass, this entitlement represents no actual cost to the tax payer unless 1) the small administrative cost is incurred by applying for the pass and 2) the pass is then used for each bus journey. Sir Alan Sugar is not alone in joining millions of other eligable pensioners in not actually taking up the free pass, let alone using it (in fact I wonder if Sir Alan can remember the last time he caught a bus and why would he when he can afford to be chauffeur driven around in a Rolls Royce?). Furthermore the proposed tax on property, previously vaunted as 'the mansion tax' could prove to be very damaging as there are many pensioners who may still reside in their family home but have actually become cash poor with the raids on pensions carried out by the last government and the slow recovery which we all hope is taking place now. London Mayor, Boris Johnson summed this up rather well when he said "I like Nick Clegg but he can’t be serious. These proposals are a non-starter. He knows it. I know it. The idea of a mansion tax is crazy. The idea of a mansion tax by the back door through vastly inflated council tax bills is nonsense. These taxes will disproportionately hit London and Londoners, penalising people simply because of circumstance, trapping people who in many cases are cash poor. London is the motor of the UK economy; kicking it hard makes no sense at all." 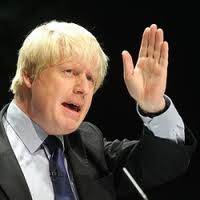 Boris is of course quite right as by far the largest proportion of valuable property is located in not only London, but the shire counties and South East which surprise surprise with the exception of our own Eastbourne MP and neighbouring Lewes MP, has little or no Lib-Dem members of parliament.

Nick says that for blue to go green, you have to add yellow. It didn't raise much of a laugh when he said it but I say, "to lance the increasingly large boil in this Government, we have got to take the yellow out at the earliest opportunity".
Posted by Cllr Patrick Warner at 02:01