David Cameron: 'to axe Trident would put us in danger'

David Cameron warns today that it would be “foolish” for Britain even to consider abandoning Trident because the country faces an increased threat of nuclear attack from regimes such as North Korea.

In an article for The Daily Telegraph today, the Prime Minister says that the nuclear threat facing Britain has “increased” since the end of the Cold War and that the country still requires the “ultimate weapon of defence”.

For the first time, he suggests that Britain may be in range of ballistic missiles fired by the “highly unpredictable and aggressive regime” in North Korea.

In an attack on the Liberal Democrats, who are considering calling for Trident to be scrapped, the Conservative leader also questions whether anyone can “seriously argue” that now is the time to surrender our deterrent, when the threat is “evolving”.

The Prime Minister will on Thursday welcome home HMS Victorious, a Royal Navy Vanguard-class submarine, which carries Trident nuclear weapons. The Conservatives have committed to replacing the Trident nuclear deterrent and preliminary work has begun.

The Liberal Democrats and parts of the Labour Party are opposed to the £20  billion project – and Danny Alexander, the Chief Secretary to the Treasury, is reviewing the options. They say the deterrent is no longer relevant to the geopolitical challenges facing Britain.

Mr Cameron says: “We need our nuclear deterrent as much today as we did when a previous British Government embarked on it over six decades ago. Of course, the world has changed dramatically. The Soviet Union no longer exists. But the nuclear threat has not gone away.

“In terms of uncertainty and potential risk it has, if anything, increased.”

He identifies Iran and North Korea as the new “evolving threats”. “Iran continues to defy the will of the international community in its attempts to develop its nuclear capabilities,” he says. “While the highly unpredictable and aggressive regime in North Korea recently conducted its third nuclear test and could already have enough fissile material to produce more than a dozen nuclear weapons.

“Last year North Korea unveiled a long-range ballistic missile which it claims can reach the whole of the United States. If this became a reality it would also affect the whole of Europe, including the UK. Can you be certain how that regime, or indeed any other nuclear armed regime, will develop?

Can we be sure that it won’t share more of its technology or even its weapons with other countries?”

He adds: “Does anyone seriously argue that it would be wise for Britain, faced with this evolving threat today, to surrender our deterrent?” He says that in his judgment it would be “foolish to leave Britain defenceless against a continuing, and growing, nuclear threat”.

In the article, Mr Cameron insists the Trident programme offers good value – at an annual cost of 1.5 per cent of Britain’s benefits bill. He says he has seen no evidence of cheaper ways to provide a “credible alternative”.

“Only the retention of our independent deterrent makes clear to any adversary that the devastating cost of an attack on the UK or its allies will always be far greater than anything it might hope to gain,” he says.

The Prime Minister gives a strong indication that the replacement of the Trident deterrent would be a “red line” in any negotiations over forming a Coalition after 2015. However, he does not provide specific details about how he plans to replace Trident.

Speculation is growing that Labour could abandon or scale down Trident, in a move that may pave the way for a deal with the Liberal Democrats after the next election.

Mr Cameron adds that although a world without nuclear weapons is a “fine ideal”, to disarm unilaterally would be an “act of naivety”. “It would be seen by our adversaries not as wisdom, but weakness,” Mr Cameron insists.

Last year, the Ministry of Defence announced it had placed more than £300  million worth of contracts for the design of new nuclear-armed submarines. The final decision on replacing the deterrent will not be taken until after the next election.

The Trident system involves inter-continental missiles based on Vanguard-class submarines, which are nearing the end of their working lives.

The first of the four Vanguards in service had been due to be retired in 2022. Ministers announced in the Strategic Defence and Security Review in 2010 that the boats’ lives will be extended. On the current timetable, new British nuclear-armed subs are not due in service until 2028.

That means the final decision about ordering new boats does not have to be taken until 2016.
Mr Alexander, the Liberal Democrat’s Chief Secretary is completing a review of alternatives to Trident which will be published in the coming months.

The referendum on Scottish independence in 2014 may also complicate discussions over nuclear policy.

The Vanguards are based in Scotland, but the Scottish National Party has said that an independent Scotland would not be home to nuclear weapons. 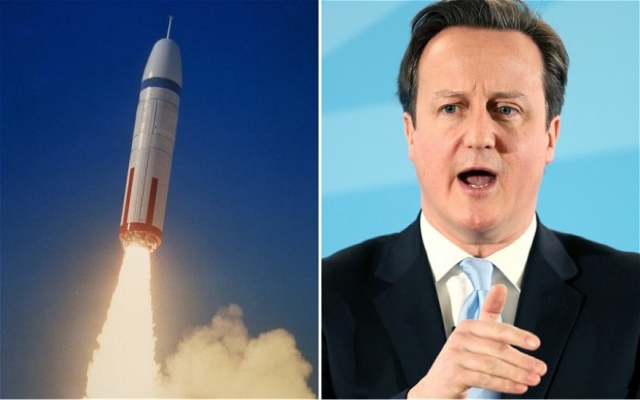 Posted by Cllr Patrick Warner at 15:25