Sovereign Ward Councillors have been campaigning for security improvements and further tree planting on popular local amenity space, Five Acre Field in Langney Point since being elected in 2011 and are pleased that improvements are now finally starting with the planting of twenty new trees.

Residents in the area have suffered from traveller encampments on the field over the years and football matches which used to be played regularly had to stop last year due to the deteriorating rutted surface of the field. Residents and Ward Councillors also worked together last year to force the Council into a u-turn over plans to hold the Circus and other events on the amenity space, these went ahead on the more appropriate events fields at Princes Park following our intervention.

I am pleased to announce that our campaigning for Five Acre is starting to pay off with the forthcoming improvements starting with twenty new trees which have been planted around the perimeter from the Sovereign Centre Roundabout down Princes Road towards the junction with Middleton Drive. The sapplings will receive extra care and watering during their first two years but should really start to become established within a couple of years as the twin line of trees which were planted along the Lottbridge Drove side of Five Acre Field as part of the section 106 agreements linked to the redevelopment of the old Coach and Lorry Park at Wartling Road.

Further work due to take place this year on Five Acre should include levelling of the sports field and enhanced security measures to reduce the risk of further illegal encampments. 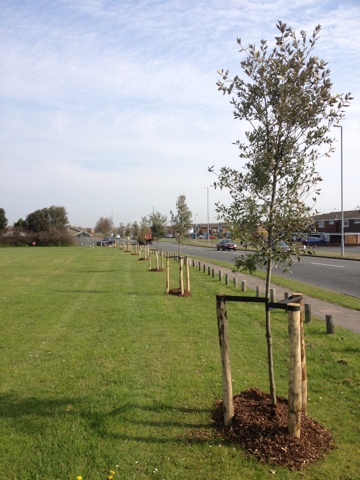 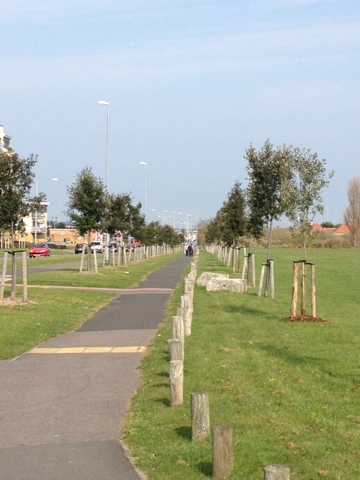 The first of the new sapplings is in the right hand side of this image but continues the line from the more established dual avenue of trees which were
planted on the Lottbridge Drove side of Five Acre Field as part of the revelopment of the former Coach & Lorry Park at Wartling Road.
Posted by Cllr Patrick Warner at 05:34