Sir Winston Churchill is to appear on the next £5 note, the Governor of the Bank of England announced today.

The wartime leader will become the first politician of the modern era to feature on a banknote, when it is issued in 2016.

Sir Mervyn King made the announcement during an event at Chartwell, Churchill's former home in Kent, attended by members of his family.

The design will feature a renowned portrait of the prime minister in defiant pose, taken by photographer Yousuf Karsh in December 1941.

Behind him is a view of the Houses of Parliament, with the hands on Big Ben showing three o'clock.

It reflects the approximate time of a statement to the House of Commons on May 13 1940 when he famously told MPs: "I have nothing to offer but blood, toil, tears and sweat."

The quote itself is also shown on the design.

A background image shows the Nobel Prize for literature, with citation, awarded in 1953 to Churchill - who apart from being a politician was a prolific historical writer.

Sir Mervyn said: "Our banknotes acknowledge the life and work of great Britons. Sir Winston Churchill was a truly great British leader, orator and writer. Above that, he remains a hero of the entire free world.

"His energy, courage, eloquence, wit and public service are an inspiration to us all. I am proud to announce that he will appear on our next banknote."

Churchill's image replaces that of Elizabeth Fry, the philanthropist and penal reformer, who appears on current notes first issued in 2002. These will be phased out over two or three years, leaving no notes featuring the face of a famous woman - other than the Queen.

The choice of Churchill reflects the fact that, though a political figure, he is widely revered across the spectrum as the man who saved Britain in its darkest hour from the fearful advance of Nazism across Europe.

Another war hero, the Duke of Wellington, is the only other prime minister to have featured on a banknote image - the old £5 phased out in the 1990s.

Churchill had a long parliamentary career during which he served as home secretary and chancellor before a spell in the political wilderness in the 1930s when he warned of the increasing threat of German rearmament.

In May 1940, he replaced Neville Chamberlain as prime minister in the newly-formed National Government. His leadership and brilliant oratory were credited with helping to steer Britain to victory.

Defeated by Labour in the 1945 general election, he served again as prime minister from 1951 to 1955, when he retired aged 80. Churchill died in 1965 and was given a full state funeral, the first commoner to receive such an honour since Gladstone in 1898.

He was also the first commoner to feature on a British coin - the 1965 crown or five-shilling piece. 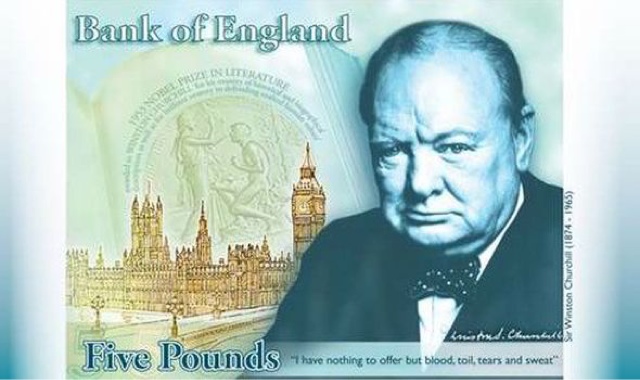 Posted by Cllr Patrick Warner at 16:30