The debt-ridden EU stares bankruptcy in the face

All the EU crises go back to the most widely misunderstood of all the treaties, the Single European Act, which Margaret Thatcher was ambushed into accepting in 1985. 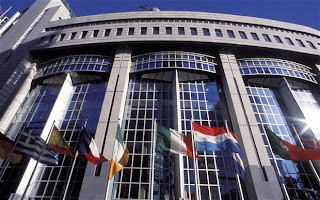 Shouldn’t it be making more headlines than it has that the European Union is today insolvent – since its astronomic debt in unpaid bills is nearly twice as large as its annual income? Such is the crisis lately highlighted by its parliament’s budget committee, which finds that the EU now owes 217 billion euros, or £182 billion, as compared with its current year’s income of just £108 billion. Much of this represents “cohesion funding” relating to Eastern Europe, in contracts agreed under the EU’s current budgetary arrangements. But when, at the end of this year, those arrangements come to an end, the rules strictly prohibit the EU from rolling forward its debts from one period to the next. So, in eight months’ time, it will lurch into bankruptcy.


Wherever we now look at the EU, its affairs seem to be in an astonishing mess. There is the ongoing slow-motion train crash of the euro. There is rising panic over the policy of unrestricted immigration, which threatens at the year’s end to flood richer countries such as Britain with millions of Romanians and Bulgarians. As Europe’s economies stagnate or shrink, the EU’s environmental policies fall apart, with the growing refusal of many countries, led by Poland and Germany, to accept curbs on fossil fuels.


What all these signs of breakdown have in common is that the policies giving rise to them all go back to the most widely misunderstood of all the European treaties, the Single European Act, which Margaret Thatcher was ambushed into accepting in 1985. This was the treaty she said was not necessary, because initially she thought all it was about was making the workings of the original Common Market more effective under the existing rules.


What she didn’t realise, because she was not properly briefed by her officials, was that it was always intended to be about very much more than just a “single market”. As its name indicated – and as Richard North and I for the first time set out in detail in our book The Great Deception – the Single European Act was always planned, by Jacques Delors, François Mitterrand, Helmut Kohl and the other European leaders who ganged up against her, to be the first of two treaties that would take the old “Community” a further giant step forwards to being a “Single Europe”. The other, the Treaty on European Union, was to be agreed at Maastricht five years later.


The Single European Act was the treaty that set in train the plan to create a single currency (which was why, up to the last minute, Mrs Thatcher considered vetoing it). It opened the door to unrestricted immigration by turning Europe into “a space without frontiers”. It created that Cohesion Fund, and it was the treaty that gave the EU the power to dictate environmental policy, under which, as early as 1991, it drew up its Strategy to Limit Carbon Dioxide Emissions in response to the panic over global warming.

Via www.telegraph.co.uk
Posted by Cllr Patrick Warner at 15:17