David Cameron has threatened to pull the rug from under his  Coalition with Nick Clegg after a series of bitter rows that have rocked the Government.

The Prime Minister said he is prepared to run the country without his Deputy PM unless Tory-Lib Dem feuding that has paralysed his administration ends.

Mr Cameron added he hopes to cling on to his ailing alliance with Mr Clegg as they tackle the economic crisis and other vital issues together.

But in a move that could trigger an early General Election, he said: ‘The best way to do that is to continue with the Coalition, but if that wasn’t the case then we’d have to face the new circumstances in whatever way we should.’

The innocent-sounding ‘new circumstances’ he refers to are the sensational prospect of an end to the Coalition. It is the first time Mr Cameron has publicly aired his fears his political marriage to Mr Clegg, sealed with sunny optimism at their Rose Garden joint press conference in Downing Street three years ago, is about to end in divorce.

Revealing his frustration in a candid interview in Total Politics magazine, Mr Cameron said: ‘I’m here to deliver good government for the country and we’ve still got important work to do – paying down the deficit, turning round the economy, and all the rest of it.

‘What matters to me, though, is can we get things done? Can we improve the state of the country? Can we fulfil our manifesto?’

If not, he continued, he was ready to ‘face the new circumstances’ – in other words, break up with Mr Clegg and run a minority Tory Government. Potentially, that could cause far more chaos than any Coalition infighting.

It was the lack of a Commons majority in 2010 that forced Mr Cameron to team up with Mr Clegg. Without the backing of Lib Dem MPs, there are insufficient Conservative MPs to get Mr Cameron’s legislation through  Parliament on their own.

In turn, that could force Mr Cameron to ask the Queen for permission to call an early General Election, instead of waiting until 2015, a key part of his 2010 pact with Mr Clegg.

Alternatively, Mr Cameron and Mr Clegg could agree to an amicable divorce, with the Lib Dem leader stepping down as Deputy PM but supporting the Tories on some issues, making it possible for Mr Cameron to cling on to power – for the time being.

It would allow them both to pursue their own separate manifestos in the run-up to the Election.
There are advantages to both leaders in a friendly split. Mr Clegg would get the chance to repair his battered reputation with Lib Dem activists. And Mr Cameron, although weakened, would be freed of constant bickering between Tory and Lib Dem Ministers and aides.

Mr Cameron’s comments follow reports that both he and Mr Clegg are facing up to going it alone in the run-up to the next Election.

In the Total Politics interview with Tory MP and author Rob Wilson, Mr Cameron vented his fury over the root cause of the Tory-Lib Dem schism – Mr Clegg’s U-turn on a pledge to back parliamentary boundary changes that would have made it easier for the Conservatives to win the next Election.

‘That was immensely frustrating,’ said Mr Cameron. ‘The Coalition has its frustrations, there’s no doubt about it, and we have disagreements. Sometimes those disagreements mean you can’t take actions in the areas that you want to.’

Mr Wilson said the PM’s comments could be a clear warning to Mr Clegg that he may be about to call an Election. A Downing Street spokesman said: ‘The Coalition will continue until 2015.’ 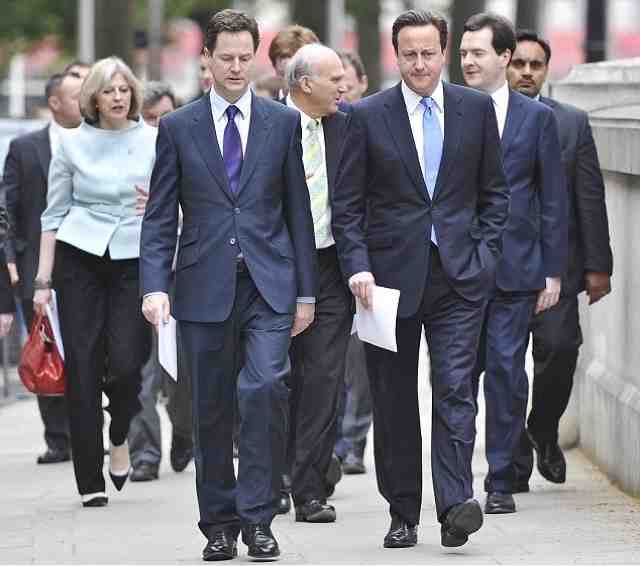