The opening date for an extension to a volunteer steam railway in Sussex has been announced. 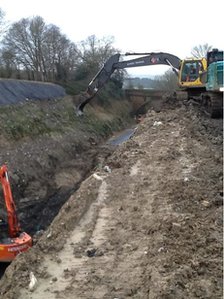 The Bluebell Railway will open its extended track, from Sheffield Park to East Grinstead, on 23 March.

The project has cost £3.5m with workers having to remove almost 100,000 tonnes of domestic waste from the Imberhorne cutting.

Chairman of the Bluebell Railway Trust Roy Watts said tickets had sold out for the first journey.

The railway currently runs for nine miles from Sheffield Park to Kingscote but the two-mile northern extension will join it up with the national railway network at East Grinstead.

Work to extend the railway began more than three years ago.

Mr Watts said: "When you think it [the trust] is a predominantly volunteer organisation, which is supported by 50-odd permanent paid staff, I think it is a phenomenal achievement.

"It is one of those things when you look at the enormity of the project and people think, 'you'll never do that', and yet here we are literally on the cusp of proving them all wrong.

"I just hope all the members are proud of what we've all done."
Posted by Cllr Patrick Warner at 07:49