Clegg defends mansion tax and tells pensioners to sell up or pay up!

Elderly people whose homes are worth more than £2million should sell up or risk paying mansion tax, Nick Clegg has claimed today. 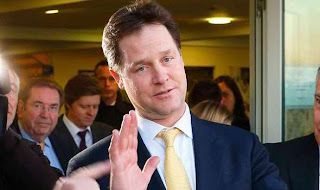 The Deputy PM suggested that a home owner hit by the Liberal Democrats plan to tax high value homes should sell his house before they die.

Mr Clegg told LBC Radio listener who had lived in his home with his family for 20 years should consider selling his property.

During his weekly Call Clegg radio phone-in, the Deputy PM told the listener, known as John, that he would indeed be better off if he chose to sell up and move out.

"Because you paid very little for it - how can I put this? I'm obviously not urging you on selling your home but if you were, as your children get older and so on, to decide to sell your home, you would be millions of pounds better off because you've got a small mortgage from 20 years ago and that is in a sense, pure profit," he said.
"That's one thing which I don't know whether you're prepared to do anyway."

He told Mr Clegg that since he bought the home in St John's Wood in London, the value of the property had “sky rocketed” to £5 million - leaving him facing the prospect of a massive tax bill under the Lib Dems' proposed annual levy on properties worth more than £2 million.

The caller responded to Mr Clegg: "But it's my home and I would have to move out of the area."
Mr Clegg also suggested that pensioners who were hit by the mansion tax could defer payment until after they died when it could be charged to their estate.

"Of course you could make exceptions for those people who have lived in properties for a long period of time and have retired and obviously aren't in a position to pay that kind of levy every year," he said.

"You could pay it as part of your estate, for instance."
Posted by Cllr Patrick Warner at 03:00