The Lord Rennard scandal puts the entire structure of the Lib Dems in the spotlight. 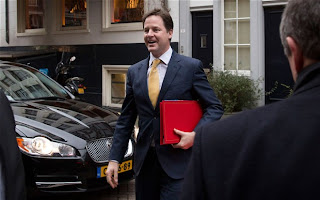 A Liberal Democrat is seldom more comfortable than when mounted on his moral high horse. Indeed, the party’s current leader, Nick Clegg, has perfected a tone of aggrieved innocence when his integrity is questioned that has become gratingly familiar during his tenure as Deputy Prime Minister.


Those within Westminster have long known that the Lib Dems’ claims to be somehow uncontaminated by the mucky business of politics are risibly hollow. In addition to the party’s notorious willingness to play dirty on the campaign trail, it has long punched above its weight in terms of scandal: the Jeremy Thorpe farrago; the millions taken (and not returned) from the fraudster Michael Brown; and the exotic personal arrangements of Mark Oaten or Mike Hancock, among others. Since entering government, it has seen the resignation of David Laws over his expenses and, most recently, the conviction of Chris Huhne.


The Lord Rennard scandal, however, puts the party’s entire structure in the spotlight. As Lib Dem chief executive, his was a position of extraordinary power: indeed it was he who delivered the leadership to Mr Clegg in 2007 and denied it to Mr Huhne, by discarding ballots held up in the post. Such was his sway, say those who charge him with sexual harassment, that they felt unable or unwilling to confront or expose him. Yet while the size of the Lib Dem operation enabled Lord Rennard to accrue power, it also made it easier for gossip to fly around.


It is understandable that Mr Clegg, unwilling to cast his party into turmoil, preferred to deal with the issue behind the scenes, accepting (or perhaps ensuring) Lord Rennard’s departure on health grounds in 2009. But his current position is harder to defend. He claims that “indirect and non-specific concerns… reached my office” in 2008; once informal action was taken, he heard nothing more until last week. Yet this paper put serious and specific allegations – of precisely the kind Mr Clegg denies receiving – to Jonny Oates, his chief of staff, in 2010, only to have them vigorously denied. Mr Oates now claims not to have passed our questions on. Whether or not that is true, serious questions remain about Mr Clegg’s account, and his judgment.


Some Lib Dems have brushed this story off as an attempt to disrupt the Eastleigh by-election. In truth, it was the fact that Lord Rennard was permitted to return to public life, not least as a member of the party’s key policy committee, that taxed his accusers beyond endurance. The fortuitous timing should, however, give voters a chance to show precisely what they think of those who cast themselves as progressive crusaders for equality and justice, while failing lamentably to live up to those ideals.
Posted by Cllr Patrick Warner at 06:55