Figures out today have shown a 3 per cent rise in the number of people in England applying for university from last year. 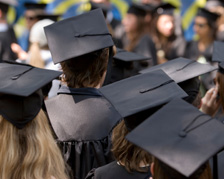 These encouraging figures saw the number of applications in the UK rise by 3.5 per cent.

The figures also showed that the application rates of 18 year olds from disadvantaged backgrounds in England increased to highest level on record at 19.5 per cent. This is up from 10.7 per cent in 2004.

The Government reformed higher education funding in 2011 to place it on a financially sustainable footing and reduce the burden on the taxpayer. Under the reformed system university students are charged tuition fees of up to £9,000 a year but only begin to pay these after they have graduated, when they are earning more than £21,000.

This system brought an end to upfront fees for university students, with universities who charged the full fees obliged to widen access to ensure they attracted students from under-represented groups.

Following these changes the Labour Party said that the Government were ‘putting thousands off university’. However the figures today reveal their comments as blatant scaremongering.

Commenting on these figures, Universities and Science Minister, David Willetts, said:
“There are no financial barriers to higher education. Our reforms ensure well-funded universities while avoiding large cuts to student places or in the money available for teaching.”
Posted by Cllr Patrick Warner at 06:58