The Prime Minister will this week signal the end of Britain’s involvement in the Afghan War by announcing a major reduction in the number of combat troops. 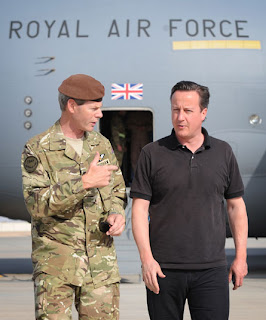 David Cameron is expected to reveal that at least 4,500 troops - more than half of the British force - will be withdrawn from the country by the end of next summer’s “fighting season”.


Around 500 troops will leave by the end of this year as Britain and its Nato partners begin discussing the number and type of troops that should remain in Afghanistan when foreign soldiers depart at the end of 2014.


But the Prime Minister will avoid offering a precise timetable for withdrawal, amid tensions between politicians and defence chiefs over how rapid the scaling down should be.


Commanders have long maintained that Nato’s advances - the term success is no longer used - against the Taliban remain “fragile and reversible” and serious doubts remain over the capability of the Afghan National Security Forces (ANSF).


Senior commanders believe that drawing down troop numbers too quickly could endanger the lives of those British forces remaining in Helmand and, in the worst case scenario, derail the entire exit strategy.


The decision on the details of the announcement is expected to be made at Tuesday’s meeting of the National Security Council (NSC), made up of senior ministers, civil servants and military leaders, which is set to discuss troop reductions in Afghanistan.

The Prime Minister and the rest of the NSC will be briefed by General Sir David Richards, the Chief of the General Staff, who is known to favour a cautious approach to cutting troop levels.
The timetable is also dependent on the whether the United States plan to confirm their troop reduction strategy before Christmas.

Leon Panetta, the US defence secretary, arrived in Kabul last week to discuss US troop withdrawals with the Afghan government. Mr Panetta also held discussions on the US’s desire to leave up to 10,000 soldiers in the country after the 2014 deadline.

A Whitehall source said last night: “The size of the British force will reduced down to some where between 4,000 and 6,000 by next October.

“Britain will not announce troop reductions before the US does and we have the other Nato members to consider as well. But there is an expectation that the Prime Minister could make the announcement this week.”

The Prime Minister is expected to say that the transition of security control from British and Nato to Afghan forces is on schedule and making good progress.

He will also say that violence in Afghanistan is falling and the vast majority of the country’s population has no interest in seeing a return of the Taliban.

It is understood that over 50 British outposts and checkpoint have been closed or handed over to the Afghan security forces as commanders begin scaling down their “operational footprint”.

But senior commanders remain concerned that the ANSF still do not possess all the military capabilities to either contain or defeat the Taliban.

The Afghan army is still heavily dependent on Britain and other Nato countries for capabilities such as clearing roadside bombs and casualty evacuation as well as intelligence, air and logistics support.
Confidence in the Afghan army has also been eroded following the surge in the number of so-called insider attacks.

However, although many senior officers remain cautious their views have softened in recent months with some even suggesting that speeding up the withdrawal process is the better option.
The Prime Minister is determined to keep defence chiefs on side in any troop reduction process but he is under pressure from members of his own cabinet, especially George Osborne, the Chancellor, who wants to see the £2.5bn annual cost of the war slashed.

Politicians are also concerned at a lack of public support for the war, in which 438 troops have been killed and thousands more injured, which polls show is very low if non-existent, with the majority believing that troops should be brought home immediately.

Earlier this year Philip Hammond the Defence Secretary gave an insight into the Government’s thinking when he admitted that the pace of withdrawal could be increased.

During a visit to Camp Bastion in Helmand, he said: “I think there is a bit of a rethinking going on about how many troops we do actually need.

"There may be some scope for a little bit more flexibility on the way we draw down, and that is something commanders on the ground are looking at very actively.”
Posted by Cllr Patrick Warner at 01:45