More than 3,000 screens have been bought by the Highways Agency to stop drivers in England rubbernecking when passing motorway accidents.

The partitions will be put up to deter drivers who slow down to look at crashes on the opposite carriageway and therefore slow down the traffic behind.

They form part of a Department for Transport initiative to improve accident clear-up times.

The government said the screens would "keep the motorways flowing".

As part of this scheme, 105 sets of incident screens will be made available for use by the Highways Agency next year.

Each set has 30 screens which are loaded onto purpose-built trailers and can screen up to 75m if used end-to-end. The individual screens are approximately 2.1m by 2m high.

Roads minister Stephen Hammond said: "This will be another great advantage to hopefully clearing up collisions but also getting the roads moving rather more quickly afterwards.

"People will recognise these screens, recognise that something's happening behind it, but actually realise it won't impact on their motorway - there's nothing to see, and we want to keep the motorways flowing."

RAC Foundation director, Stephen Glaister, said the use of the screens should be welcomed.

"Incident screens reduce disruption to traffic following an incident [and] assist the emergency services," he said.

"Ensuring that motorists not involved in an incident complete their journeys safely and on time is important. 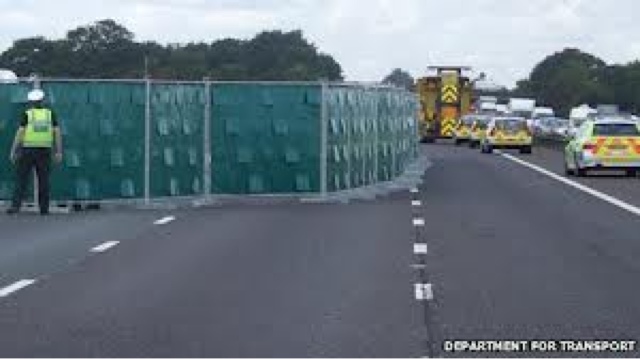 Posted by Cllr Patrick Warner at 15:36