Ed Balls on the economy? It's like consulting the undertaker before calling for the doctor

George Osborne had the guts to tell it as it is last Wednesday. We are a trading nation.

Every market to which we sell has its economic problem: America has a fiscal cliff, China and India are both slowing, Europe is mired in debt.

Searching for silver linings in such a cloud-laden sky as though we live in an economy divorced from the rest of the world is for the naive or the deceitful.

Recovery will be slow as consumers live within their means, banks rebuild their balance sheets and governments get a grip on public extravagance.

In team Cameron-Osborne, we have one of the most determined drivers of strategic growth I have seen. This is no flash-in-the-pan gesture or packet of gimmicks.

This is a Government prepared to argue for a strategy for the nation, and much more important, actually do something to implement it.

Chancellor George Osborne has set his face to the wind. Michael Gove is tackling a country of educational underperformance. Iain Duncan Smith is talking about dependency as though he understands it.

Unlike Labour, they are all determined to reduce the levels of debt. For there is no serious long-term future for our economy that does not grip the scale of indebtedness.

There is no more money, as the outgoing Labour Chief Secretary honourably admitted as Labour lost the Election. Nothing has changed – except the official Labour line that the economic law of gravity has somehow ceased to exist.
Listening to Ed Balls on economic policy has all the coherence of consulting the undertaker before the doctor has called.
You cannot borrow your way out of debt – everyone in the real world knows that. So we have to get better value from what we can afford.

That is the message of my report, No Stone Unturned, which aims to reverse a century of centralisation.
Mr Osborne has endorsed its localist thrust to revive the local initiative and drive of earlier centuries that made us what we are. Switching money from departmental administration budgets into building schemes is the right way to go.
Taking cash from bureaucracy and channelling it into house-building, schools and science will create jobs now and provide long-term stability.

Rather than Ministers and civil servants in London saying to places such as Carlisle and Crewe, ‘You can have this much for roads, this much for housing, this much for waste’, ask those places: ‘What would you spend it on?’ It’s truly transformational.

It gives me great encouragement that Mr Osborne said on Wednesday that he agrees with that idea and will work up plans in next year’s Spending Review to achieve it. I salute such confidence. The confidence of a Government to turn to someone outside and ask for their thoughts. Not just anyone, but me. The fact is I come with baggage – I have previous, as some would say.
But that baggage – my 40 years in Whitehall and my 60 years running my own business – has taught me there is another, better way of doing things.
We are far too over-centralised in the UK. In the US, they have the states, in France the departments and in Germany the länder. We have no comparable system of real local power, influence and decision-making.

The Chancellor also gave the green light to my suggestion that Local Enterprise Partnerships receive money to develop growth plans for their areas.

LEPs are led by local business people and are a partnership with local government. They have thus far relied largely on goodwill, but will now be funded by government to spend two years looking at strengths they wish to build on and weaknesses they wish to overcome.
Just imagine – 39 teams right across England, beavering away to identify how high streets and businesses can flourish.
Mr Osborne announced further money for the Regional Growth Fund. To find extra cash for it at such times of economic prudence is a sign of its remarkable success. It is delivering long-lasting private sector jobs in the places that most need them.

The fund is underpinned by all the things I believe in – that government should ask local people for their ideas rather than dictating to them from London; that wealth creation should be a joint venture between the private and public sectors; and that if you make the allocation of public money a competitive process, the amount of match-funding you can lever in from the private sector is staggering.

There were, of course, things the Chancellor did not say I would have liked him to, but I am heartened to hear a full response to my ideas will come in the spring.

I hope that response will say more about local business support. There is little point giving more money, and influence over how it is spent, to our towns and cities if there is not an environment in which firms help each other to get ahead.

If you are interested in exporting, you need to be able to speak to someone who has been doing it successfully for years. If you want to take on apprentices, you need the advice of a firm that already has dozens on its books.

None of this is rocket science but it can’t happen by chance. All of our major competitors have sophisticated local business support, yet ours is too fragmented, or non-existent in places.
The chamber of commerce in Milan has 350,000 businesses as members, whereas Birmingham’s has fewer than 3,000. We must do something to remedy that. We cannot make firms sign up to chambers, so why don’t we make them attractive bodies that people want to join? To that end, I suggest letting chambers deliver services that currently sit in Whitehall and its quangos.

Part of the reason we have fallen behind in the global race is that too often people think growth is someone else’s problem. Whether it is Whitehall departments not seeing how they contribute to wealth creation, local authorities obsessing about social provision, or coasting businesses not doing more to increase their performance, we all can – and should – do more.

Governments do not have all the answers. As a Conservative, I have never believed they could do. But only the Government can empower us to find those answers ourselves. I hope that in their full response in the spring, this Government will take the opportunity to do just that.

Article by Michael Hestletine for The Daily Mail 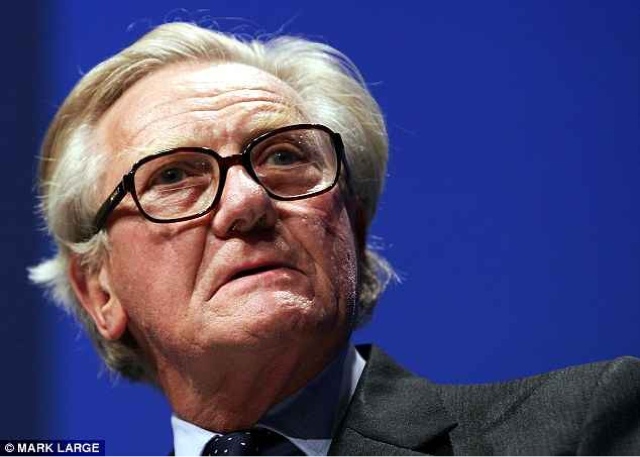 Posted by Cllr Patrick Warner at 16:05