A raven given to the Queen to mark the Diamond Jubilee has been released at the Tower of London.

The new recruit, named Jubilee, was a gift from Martin Harris, a Somerset breeder who has been supplying ravens to the tower for 12 years.

Seven of the eight resident birds have been bred by Mr Harris to fulfil King Charles II's decree that at least six ravens should be kept at the tower at all times.

Now, after more than six months of settling into "tower life", Jubilee has been released from his cage to enjoy "the freedom of the tower".

"Raven Jubilee is doing very well and has now been trained to come out of his cage and meet all the visitors," Chris Skaife, the tower's raven master, said.

"But it takes years for the birds to really get to know members of the raven team and for us to get to know them and their idiosyncratic ways."

He added: "They are the most pampered birds in the country - and one of the most intelligent.

"They gang up on small children with crisps at the tower - but they don't like cheese and onion - so they'll open the packet and dip the crisps in water to get rid of the taste."

Jubilee joined the tower's "privileged" resident birds in May and has just recently been released
Looked after by a team of four, night and day, the birds are fed a diet of 6oz (170g) of raw meat and bird formula biscuits soaked in animal blood each day.

And once a week they enjoy an egg, plus the occasional rabbit.

It was more than a decade ago that Mr Harris was contacted by the Tower of London's raven master to provide birds for the historic visitor attraction. He thought it was a "hoax call" and hung up on him.

He said supplying the tower's birds was as "good as it gets for a raven breeder".

"They are really smart creatures. They can mimic police sirens and take a mobile phone apart in 30 seconds and they're so inquisitive and so nosy," he said.

"But if they got too friendly with humans, they could end up assuming everything was theirs and be sitting on people's shoulders and terrorising visitors.

"So we leave them with their parents to rear them, so they are not imprinted and it gives them a bit of wildness and makes them a bit aloof."

Legend has it that should the ravens ever leave the tower it would crumble, and a great disaster befall the UK.

But occasionally an enlisted raven has to be dismissed.

Pearl, a female, was installed in the tower in June 2011 but had to be returned to Mr Harris for a course of "confidence building".

"Pearl didn't cope well - she was getting bullied by the other ravens so I've got her back here and she's in with my own pet raven and holding her own," said Mr Harris.

"I've been leaving food out for her to come and 'steal' - that's point scoring for ravens and that's building her confidence as well.

"We had another one, he was really smart, he came back to us too but he was an out-and-out thief and didn't do well in the tower either."

A second male bird, bred by Mr Harris and named Gripp after Charles Dickens' pet raven, has also been enlisted by the tower and has been released along with Jubilee. 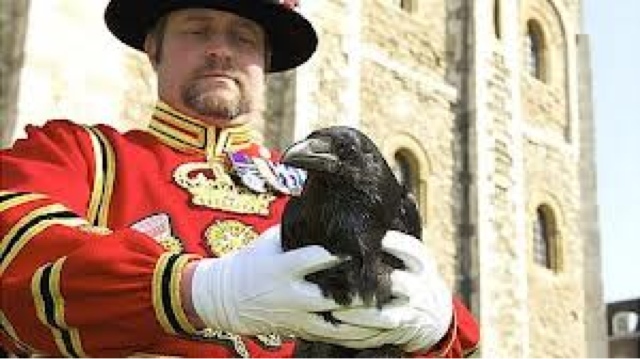 Posted by Cllr Patrick Warner at 14:30