Genetically modified food should be grown and sold widely in Britain and consumer opposition to the technology is a “complete nonsense”, the Cabinet minister in charge of food and farming has said. 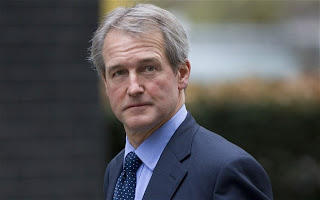 Owen Paterson, the Environment Secretary, made the remarks as ministers prepare to relax controls on the cultivation of GM crops, which he said had “real environmental benefits”.


Some senior Government figures privately believe that the technology — which can increase crop yields and prevent disease — is essential in assuring Britain’s future food security and to avoid dependency on imports.


Any move to allow the use of GM crops could be highly controversial, but Mr Paterson dismissed critics of the technology as “humbugs” and said that the case for GM food now needed to be made “emphatically”.


The comments are likely to alarm opponents of GM food, who fear that the crops can cause environmental damage and even be harmful to human health.


The Coalition has so far allowed small-scale cultivation trials for GM food but its widespread use is effectively banned. Some GM products are contained in imported foods, but most supermarkets have banned the ingredients from their own-brand products because of public unease about the material.


In the late Nineties, Tony Blair, the former prime minister, promoted the use of GM food, but later retreated in the face of public scepticism and campaigns against “Frankenfoods”.

However, recent polls suggest that British hostility to GM technology is waning, and some senior ministers are keen to explore its use. The Government has recently run a low-key consultation exercise about new “agri-tech” measures to increase the efficiency of British farms. The consultation sought views on options including the increased use of GM crops.

A formal ministerial response is due next year, but insiders say the exercise is likely to lead to an increase in the use of the technology.

Speaking to The Daily Telegraph, Mr Paterson, said: “Emphatically we should be looking at GM … I’m very clear it would be a good thing.

“The trouble is all this stuff about Frankenstein foods and putting poisons in foods.
“There are real benefits, and what you’ve got to do is sell the real environmental benefits.”
Those benefits include a reduction in the use of pesticides because some GM crops are pest-resistant, he said. That in turn reduces farmers’ fuel use.

The Environment Secretary also said that consumers were already unwittingly eating GM food on a regular basis, so concerns about human health are misplaced.

“There’s about 160 million hectares of GM being grown around the world,” he said. “There isn’t a single piece of meat being served [in a typical London restaurant] where a bullock hasn’t eaten some GM feed. So it’s a complete nonsense. But, the humbug! You know, large amounts of GM products are used across Europe.”

Mr Paterson would not be drawn on the consultation, but said he was confident that David Cameron would find an “appropriate moment” to back GM food.
“I’m very clear it would be a good thing,” he said. “So you’d discuss it within government, you’d discuss it at a European level and you’d need to persuade the public.”
Mr Paterson’s views on GM food are understood to be shared by a number of his colleagues, including David Willetts, the science minister.

Senior Liberal Democrats are also understood to be open to a change in policy.
During the past decade, the Lib Dems strongly opposed the increased use of GM technology for food, although the party’s election manifesto made no mention of the issue.

Some Lib Dem ministers fear that their party activists would strongly oppose any relaxation in the current rules, but others say the change must be considered.

David Heath, the Lib Dem farming minister, told farming groups last month that GM food was “one of the tools in the box” for increasing food production.

A senior party source told The Daily Telegraph that it should make the “rational” case for GM technology amid a growing global population and demand for food.

“This is something that we need to do to ensure that everyone has enough to eat in the years to come,” the source said. “Yes, some people have doubts and fears, but that’s something we should deal with, not run away from.”

Mr Paterson’s predecessor at the Department for Environment, Food and Rural Affairs was Caroline Spelman. She also backed the “benefits” of GM crops, but did not lift the ban on their commercial cultivation.

The official Government policy on GM crops is “precautionary, evidence-based and sensitive to public concerns”. It describes the technology as “not wholly good or bad” and will consider licensing crops on a case-by-case basis.
Posted by Cllr Patrick Warner at 02:27