Over £4,000 raised from Mayor's Charity Abseil for Lark in the Park Children's Charity

Regular readers of my blog may remember my taking part in the Mayor of Eastbourne's Charity Abseil in October this year. The Mayor, Cllr Elkin and myself joined several brave individuals in dropping down the side of our council offices at 1 Grove Road in Eastbourne.

This week it was announced that whilst fundraising donations and sponsorship money was still coming in, over £4,000 was raised from the event. Eastbourne Mayor, Cllr Mike Thompson said "thank you to everyone who has supported the three fundraising events for Lark in the Park to date, whether you came to the summer barbecue at Chalk Farm, took part in the quiz night or dropped off the council office roof - a massive thank you for the money raised so far".

I would like to add my thanks again to everyone who sponsored me, it was great to take part and raise funds for such a worthy charity. Prior to the last Full Council meeting, the Mayor and I were talking about the abseil and he asked if I'd join him again next Spring but from a taller building this time. The search is now on and of course I'll be happy to join in again, if you know of a taller building in the local area that might be appropriate, please let me know and I'll pass the details on to the Mayor. 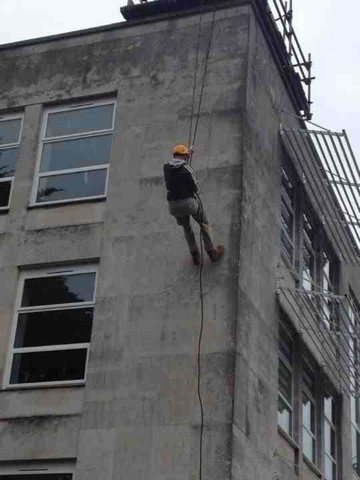 Posted by Cllr Patrick Warner at 14:05