WHY do politicians envy ventriloquists? Because they can lie without moving their lips.

OK, it’s an old joke. No one expects politicians to tell the truth, the whole truth and nothing but the truth.
But I’m still shocked by just how dishonest Ed Miliband and the Labour front bench are whenever they talk about the Government’s economic policy.
Take the “tax cut for millionaires” they’re always going on about.

This is a reference to George Osborne’s decision last March to cut the top rate of tax from 50 per cent to 45 per cent.
Last Wednesday, Ed Balls told the House of Commons this is worth an average of £107,000 for the 8,000 people earning more than £1million a year.

But are top earners really better off under this Government than they were under Labour?
The answer is no.
According to the Treasury’s official figures, those earning £1million a year gave, on average, 35.1 per cent of their income to the taxman in Labour’s last year in office.

This year, those same people are handing over 43.6 per cent.
That’s a whopping 25 per cent increase in the amount of tax they are paying.
If you look at those earning £2million a year, the difference is even more stark.
Under Labour, they paid an effective tax rate of 34.7 per cent. This year, they’re paying 44.3 per cent, an increase of 27.67 per cent. Not surprising, really, when you consider that the top rate of tax was five per cent lower under Labour than it is today.

Under the last Conservative government, the top tax rate was 60 per cent (at least, until 1988).
Under Labour, it was 40 per cent. Millionaires had no better friends than Tony Blair and Gordon Brown.
Then there’s Labour’s constant bleating about “the cuts” and how they’re causing untold misery and pain to the poorest members of our society. (Cue violin music.) In fact, there have been almost no cuts to our bloated public sector. For the first two years of this government, public expenditure actually increased.

As Conservative MP John Redwood recently pointed out: “The UK economy has recorded growth in its public sector”.
Instead of cutting public services, the Chancellor has attempted to get the deficit under control by increasing taxes — one reason his deficit reduction strategy hasn’t worked very well.
And the burden of those tax increases has fallen on the richest members of our society, not the poorest.

According to the Treasury, those earning £10,000 paid an average of 7.8 per cent tax in Labour’s last year in office compared to 5.7 per cent today — and it’s set to fall even further over the next few years.

Indeed, the only people paying a higher percentage of their income in tax this year than they were in 2009 are those earning over £50,000.

However you measure it, the people who’ve seen their wallets hit the hardest by this Government are the top ten per cent of earners.

They may be doing OK, but they’ve seen their overall income fall by a greater percentage than anyone else.
Labour frontbenchers are always poking fun at Osborne’s claim that those with the broadest shoulders are bearing the greatest burden, as if it was a preposterous lie.

In fact, it’s true and the Treasury’s statistics bear it out.
The only lies about this Government’s economic policy are being told by Ed Miliband and his Labour chums.
If I was the Labour leader, I’d keep a fire extinguisher handy at all times because any moment now his trousers are going to go up in flames. 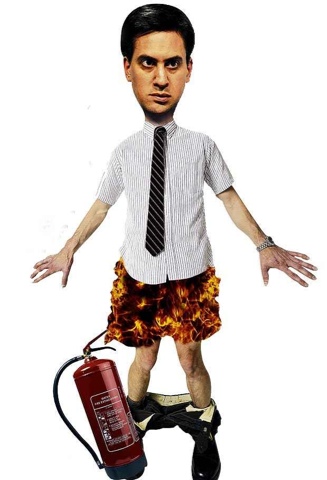 Posted by Cllr Patrick Warner at 16:10