A police constable with the diplomatic protection group has been arrested on suspicion of misconduct in a public office, Met Police say. 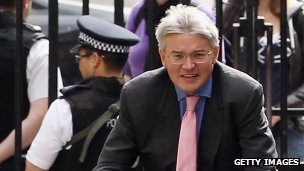 The officer was arrested late on Saturday and bailed on Sunday to return in January. He has been suspended.

The arrest was made by officers investigating how national newspapers came to publish police records of an incident at Downing Street.

It involved the then chief whip allegedly calling officers "plebs".

In September Andrew Mitchell apparently made the comments and swore when police asked him to use the pedestrian gate, rather than the main gate, to leave Downing Street.

Mr Mitchell apologised for not having shown enough respect to the police but maintained that he "did not use the words attributed to me". However, he quit the government over the affair a few weeks later.

On Monday, Mr Mitchell told the BBC: "I reiterate once again that the contents of the alleged police logbook are false."

The official police log of the confrontation between the chief whip and officers was published by the Daily Telegraph and the Sun.

On Sunday, the Met said the arrested officer was not on duty during the incident, and investigations have found no evidence to suggest those on duty on the day were involved in the unauthorised release of information.

The arrest will be formally referred to the Independent Police Complaints Commission on Monday, the Met Police said.
Posted by Cllr Patrick Warner at 01:53