The Prince of Wales has told British forces fighting in Afghanistan that the nation owes them "an everlasting debt of gratitude".

He thanked them for their "fortitude and relentless courage".

In a pre-recorded message broadcast on radio on 26 December, he said that all troops serving "in far off lands" were in his thoughts and prayers.

He joked that he had received a "very rare and precious letter" from Prince Harry, serving in Afghanistan.

His 28-year-old son is an Apache helicopter pilot, serving as part of the 100-strong 662 Squadron, 3 Regiment, Army Air Corps in Helmand province.

Charles's broadcast was aired on the British Forces Broadcasting Service radio on the Total Ops Connection programme, broadcast across the world from Camp Bastion.

He said: "I... wanted to pay tribute to the extraordinary contribution made by those of you who belong to our Armed Forces, in all sorts of different parts of the world.

"Nowhere is your fortitude and relentless courage more clearly on display than in Afghanistan, where your resilience, patience and determination to see the job through - usually in impossibly difficult conditions and circumstances - is, quite simply, humbling."

The heir to the throne is colonel-in-chief of a number of regiments serving in Afghanistan and he said he knew about the hardships troops face because of the regular reports from his units - and the occasional contact with Harry.

He said: "I am well aware of the discomfort and privations you all endure with seemingly endless reserves of good humour.

"In addition to the intense heat and dust of the summer and the freezing winters, you face the constant, terrifying threat of IEDs (improvised explosive devices), attacks from rockets, grenades and small arms fire almost every day - and sometimes these attacks come from infiltrators hidden among those who are supposed to be working alongside you as allies.

"And yet you all seem to bounce back in an almost unbelievable way, despite the setbacks and vicious insurgent attacks."

Prince Charles' elder son, William, also serves with the armed forces - as a search and rescue pilot with the RAF.

He said: "With two sons currently serving in the Armed Forces, one of whom is with you all out there, I really do have at least some understanding of what your loved ones on the 'home front' are going through."

He said servicemen and women could keep in touch with relatives through phone calls and the internet "or, in the case of my younger son, to receive a very rare and precious letter in answer to mine". 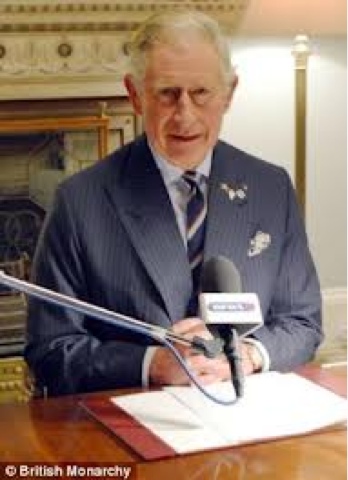 Posted by Cllr Patrick Warner at 14:25