Senior figures in the coalition government are on a collision course over the fate of the “greatest black Briton”, The Independent has learned. 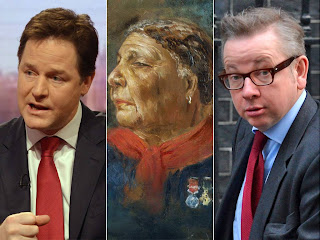 Sources close to the Deputy Prime Minister Nick Clegg said he is determined to put a stop to plans reportedly put in place by Education Minister Michael Gove to remove Mary Seacole, renowned for giving sanctuary to soldiers during the Crimean War, from the National Curriculum.

But Mr Clegg is prepared for a clash with the Education Minister to keep her on the list of classroom suggestions.
Mary Seacole, who topped a poll of black Britons in 2006, appears on the Curriculum in a list of people it is suggested teachers use to illustrate the Victorian period in their classrooms. A Liberal Democrat source close to the Deputy Prime Minister said Mr Clegg “supported her continued inclusion on the list” when the Curriculum is rewritten.

And he said that Mr Clegg was prepared to fight her case as the discussions go on. “We do not want her to be replaced. If what was put to him was that she was going to be downgraded in relation to others we wouldn’t agree,” the source added.

According to Liberal Democrat councillor Lester Holloway, Mr Clegg has also privately insisted that the removal of Mary Seacole from the National Curriculum is “not going happen”. And a group of 24 MPs from all three major parties, as well as others, have signed an Early Day Motion declaring themselves “greatly alarmed” at Mr Gove’s plans.

Seacole’s contribution during the Crimean War has been held up as one of the earliest examples of black Britons’ impact on the nation’s history by her proponents. Operation Black Vote started a petition against her removal earlier this month, which has been signed nearly 35,000 times.

Simon Woolley, Director of Operation Black Vote, said she was one of the only black people in British history whose life was not talked about “through the prism of racism”. He said: “It is fantastically important to have people such as Mary Seacole taught in our classes.”

“Without the social history of people like Mary Seacole, our children, black and white, get a very distorted view of black people and of Africa. Our continent is more than a picture of extreme poverty. Our history is more than just slavery. This narrow view serves no-one in giving a full picture of collectively who we are, and how we see the world.”

But others have argued that her medical achievements have been overstated for political purposes. Historian and writer Guy Walters said: “She was a very worthy woman, it would be churlish not to hold her up as a good role model. The problem is that, because of her colour and because of political need, her achievements are massively oversold."

He said her achievements in running the British Hotel – which he likened more to a guest house than a hospital – should not be underestimated. But, he said she was someone who comforted soldiers, not a medical figure.

And he argued that Seacole is a figure who is talked about “in terms of race”. He said: “There is no doubt that, had she been white, we would not be talking about her today and I think it is disingenuous to claim otherwise.”

Operation Black Vote members said they have tried unsuccessfully to set up a meeting with Mr Gove, and Mr Woolley said that Mr Clegg could also come under pressure over the issue, should he fail to deliver. “I think this is very brave of the Deputy Prime Minister who has said he will no longer make pledges he knows he can’t keep. Let’s just hope that Gove listens to him and to the tens of thousands who want Mary Seacole on a curriculum that reflects our rich history,” he said.

Mr Woolley added: “If Clegg keeps his promise it will ensure not only that Mary Seacole, and Olaudah Equiano stay the National Curriculum but the principal of our rich diversity remains key to our children’s education. Saving Mary Seacole equates to ensuring cultural diversity on the Curriculum.”

A Department for Education spokesman said: “The Department does not comment on leaks.”
Posted by Cllr Patrick Warner at 02:37