Upgrading the rail system is crucial if we are to be economically competitive again, says Boris Johnson but what he says about London is just as important in other areas of Britain where Roman road networks are totally inadequate and train services overcrowded and often not going in the right direction.


I expect Sigmund Freud would have a word or two to say about it, but there is something about the sight of a steam train that seems to turn adult males into bug-eyed adolescents. As for steam trains entering underground tunnels — phwoar!
Choo choo, said our charismatic red locomotive, as it throbbed and chugged along the Metropolitan Line — from Paddington to Farringdon, on exactly the pioneer route of 150 years ago. Choo choo, it cried to the astonished crowds. From every bridge hung the railway enthusiasts, cameraphones flashing, and the platforms were thronged with geeks like goggling meerkats.
They had every right to be amazed, when you consider that this is the first time in our lifetimes that we have perfectly recreated a Victorian Tube train. As we lolled on the red velvet and looked at the gleaming teak and brass of our compartment, it was easy to imagine the first passengers: the nodding of top hats and the rustle of crinolines and Sir Arthur Conan Doyle sitting in the corner and getting an idea for his latest story — and as we pulled up at stations you could just see how the villain could slip away in the great white billowing exhalations of steam.
Yes, I can perfectly understand the romance, the excitement that grips the railway buffs. But it wasn’t the romance that seized me, not exactly. It was the sheer daring — the nuttiness — of our great great grandparents. Consider this contraption that was effortfully hauling us up Notting Hill — thugga thugga choo choo. Think of the magnesium glow of its boiler full of Welsh coal, the sweating stokers toiling away like some medieval vision of hell, the smuts of soot coming in through the window and covering the sipper lid of my latte.
By the time they tested the first Tube train, the very concept of a railway was only 30 years old; and you will remember how the test run of the Manchester-Liverpool line had been a bloody fiasco, with Stephenson’s Rocket crunching up the trade secretary and chopping off his leg. And yet here they were, audaciously sending this infernal machine into cut-and-cover tunnels under London and causing chaos and disruption on the route.


Why did they do it? It was desperation. The idea first occurred to a London solicitor in the early 1840s, when he found himself going wild with fury in a traffic jam (“Trains in drains!” he cried, smiting his forehead). By then the population was already 2.8 million, and there was no more space for conventional overground tracks. The congestion of carriages was unbearable; the horse dung was mounting in the streets; the economic inefficiency was growing.

London was the greatest city on earth, a centre of banking, shipping, insurance and law — as it is today — and the clerks could not get to their place of work. Then came the Tube, and effectively made the modern city. By the early 20th century, electric trains had created the suburbs, and enabled the professional classes to buy homes with gardens and live within less than an hour of their offices. The great Victorian gamble had paid off.

Investment in transport infrastructure — often led by the private sector, but invariably bailed out, one way or another, by the state — had unleashed the potential for economic growth. It is the transport that enables the housing; it is the housing that enables the concentration of skilled workers that produces economic competitiveness.

We need to remember that boldness today, and we need to recreate it urgently — for the good of the whole UK economy. It is true that we are making some overdue but still phenomenal improvements in the Tube. We will soon have air-conditioning on 40 per cent of the network; the Victoria line will next week go up to a record 33 trains per hour; we have put in such excellent new signalling on the Jubilee line that trains are now running three mph faster than they were four years ago (to pick a period entirely at random) and delays on the system are down 40 per cent on four years ago.

We have Crossrail’s excavations landmarking our streets, and by 2018 this project — the largest engineering project in Europe — will add 10 per cent to the rail capacity of London, on top of the 30 per cent expansion of the Tube. And none of it will be enough. Since I have been Mayor, the population of London has grown by a dizzying 600,000 — or so the census says — and we are expecting to go up by a million by 2025.

London in the 21st century looks like retaining the crown it achieved in 1800 — comfortably the most populous and commercially powerful city in western Europe. It is that extraordinary demographic pressure of nine million people that means we must have a neo-Victorian approach to transport infrastructure.

If HS2 comes into Euston — by whatever route — then we must have a Crossrail Two, from Hackney to Chelsea, to deal with the influx and also to cope with the pressure on the already straining commuter networks of south-west London. We will need to continue the improvements of the Tube — with new rolling stock on the Piccadilly line and upgrades of the Northern line; and every new train must be automatic rather than equipped with an old-fashioned driver’s cab.

We must remember that we will be able to plan and procure more cheaply if we have a steady and consistent stream of funding, and we need to learn the lesson of the terrible mistakes of the second half of the 20th century. Britain failed to invest in the transport needs of its capital, with the result that the system decayed, the economy stagnated, and the population actually declined. We allowed our docks to be replaced by Rotterdam, and we shambolically missed the chance to create a new hub airport to rival other EU capitals.

We can correct all those mistakes today, and in so doing we will put Britain on the path to sustained recovery, generate hundreds of thousands of jobs, and gain long-term competitive advantage. Yes, there was something nutty about the Victorians. But we need to rediscover their brilliance, their drive, and their self-belief. We should start with transport. 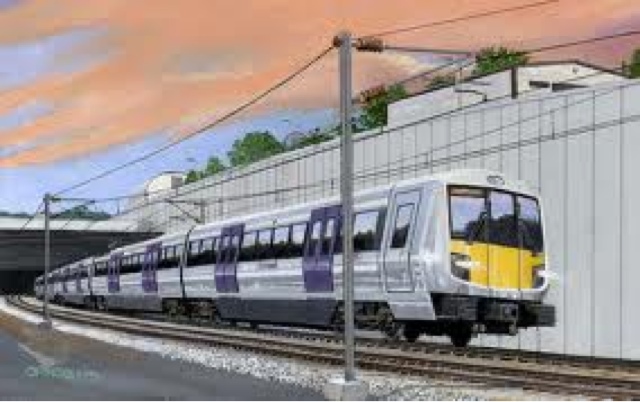 Posted by Cllr Patrick Warner at 05:09