David Cameron’s plan for a referendum on Europe has been endorsed by a leading Tory MP.

Dr Liam Fox, the former defence secretary, who is seen as a standard-bearer for eurosceptic backbenchers, called for an “in-out” referendum to “settle the argument” over whether Britain should quit the European Union.

He declared himself “broadly satisfied” with the extracts he had seen of the Prime Minister’s delayed speech on European policy, suggesting that Mr Cameron had done enough to pacify many eurosceptic members of his party.

“If that is the speech that is finally delivered, a great many of us will think it’s a speech we have been waiting a long time for any Prime Minister to deliver,” he told BBC One’s Sunday Politics.
Most British politicians on the Right would prefer a “renegotiated relationship” with Europe, rather than to see the UK quit the EU, he said.

However, the public want “clarity” over Britain’s future relations with Brussels.

“I think ultimately there has to be an in-out referendum because otherwise we’re going to have our politics in Britain constantly undermined by this debate. It's very important that we settle, one way or another, the European argument for a generation,” he said.

The Prime Minister was due to deliver his speech last Friday in Amsterdam but was forced to postpone his long-awaited announcement as the Algeria hostage crisis worsened.

The Foreign Secretary, William Hague, confirmed that the speech would take place this week and gave the strongest signal yet that it would contain the promise of a choice over whether Britain should leave the EU.

“The European Union is changing to such a degree, and will change over the next few years to such a degree that the fresh consent of the British people is required,” Mr Hague told Pienaar’s Politics on BBC Radio 5 Live. “The clearest way to obtain such consent is in a referendum.”
Mr Cameron has said that he favours Britain remaining inside the EU but with a new, scaled back relationship. Much of the current red tape and regulation surrounding employment and social policy would be cut.

However, his position appears to have hardened in recent weeks. Mr Cameron is now said to be openly considering a referendum at some point during the next Parliament. It would contain a clear choice over whether to leave the EU.

Michael Portillo, the former Tory Cabinet minister, warned Mr Cameron that he was making an “extraordinarily dangerous” gamble by offering voters the option to leave.
“People like to kick their government in the teeth," he said.

Mr Cameron hopes his speech will satisfy his own eurosceptic MPs and win back public support that has been lost to the increasingly popular UK Independence Party in recent months.
Nigel Farage, the leader of Ukip, said he would never agree to an election deal with the Conservatives while Mr Cameron remained Tory leader.

“It’s very interesting, Ed Miliband, Nick Clegg, they don’t agree what Ukip stands for, but they recognise we have a sensible point of view that is held by a large number of people in this country,” he said.

“Mr Cameron, when he is asked about UKIP, throws abuse at as and calls us nutters and closet racists.”

Some Tories believe a deal with Ukip could be their best chance of winning a Commons majority, with Mr Farage’s party in third place in recent opinion polls. 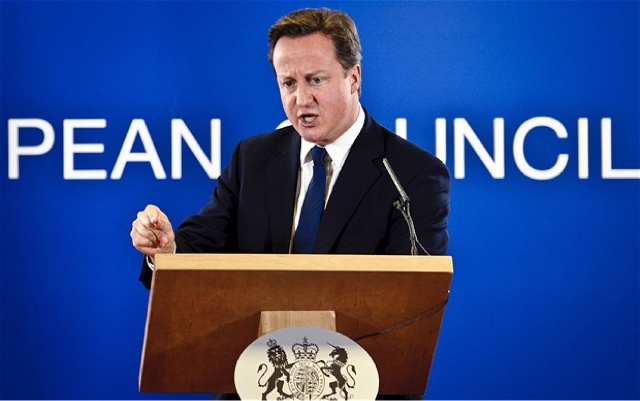 Posted by Cllr Patrick Warner at 23:04