George Osborne this week delivered a neutral budget which nonetheless provided some bold and imaginative flourishes: a personal tax allowance of £10,000 which Labour never dared to give the low-paid; help for first-time house-buyers; some relief for drivers and even drinkers; and incentives for job-creation.


The Chancellor did his very best with an almost empty moneybox, offering a touch of cheer to those who need and deserve it most.


That, though, was the politics. The horror story in his speech lay in the economics — the sorry succession of statistics he was obliged to recite, which mock his own predictions since 2010.


Most shocking of all was yet another cut in the forecast for economic growth, which remains stagnant. By the next Election, Britain’s output is likely to remain below its 2007 level. This is even more shocking than the fact that public-sector debt remains sky-high.


Mr Osborne proclaimed that Britain is creating the most competitive corporate tax regime in the world, but said nothing about the dead-weight of business regulation still clogging enterprise.


He declared his commitment to shale gas extraction, despite the fact that Britain has lacked a credible energy policy since the day the Coalition took office.


Britain’s only shale drillers have just been obliged to halt operations for six months at one site because of opposition from bird-watchers and Lancashire County Council.


This would be comic, were not our national predicament so grave and our energy needs so urgent.


Osborne claimed to be promoting a renewal of national infrastructure, yet his government abjectly refuses to create more airport capacity in South-East England.


He announced welcome cuts in employers’ National Insurance and introduced a radical £10,000 personal tax allowance, but he has done nothing to stop HMRC’s latest act of petty oppression: forcing even small businesses to report PAYE payments monthly instead of quarterly.


The truth is that this remains a fumbling Government, often incoherent in its policy-making and incompetent about delivery.


The Chancellor is personally unlovable, and his reputation has been severely battered by his long succession of unfulfilled economic forecasts. He knows he is in deep trouble, which makes him try too hard for winning words.


There are fears, increased by hints from the Chancellor himself yesterday, that when Mark Carney takes over as the new Governor of the Bank of England in July, he will print money on an unprecedented scale to stimulate growth. This could unleash a surge of inflation.


Once inflation gets going, within months it can soar into double digits, as those of us old enough to have lived through the era of 20 per cent and above, in the 1970s, vividly recall.


With inflation would come much higher interest rates. If that blight falls upon a weak economy, we shall be in deep trouble — and it could easily happen.


But that is the case for the prosecution.


Now, instead, consider the case for the defence of George Osborne.


This was made with painful clarity by the row of grinning, mocking, smirking faces on the Opposition front bench while the Chancellor spoke. His words were sometimes almost drowned out by the barracking of the arch-hypocrites of the Labour Party. 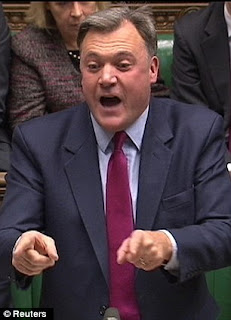 It was these people, headed by Shadow Chancellor Ed Balls, who plunged this country into the worst economic mess of our lifetime through a decade of reckless and unaffordable expenditure.


And it is they — given half a chance by voters at the 2015 General Election, aided by a Conservative vote split by UKIP — who once again in power will pick up exactly where they left off in 2010.


Ed Miliband thrilled to his own eloquence yesterday, denouncing Osborne as ‘the wrong man in the wrong place . . . a downgraded Chancellor’. Yet Miliband and Balls promise that if they get into Downing Street they will launch a renewed borrowing and spending spree.

The policies of Balls and his former boss, Gordon Brown, bombed Britain as devastatingly as did the Luftwaffe in 1940. David Cameron and George Osborne inherited smoking economic ruins.


It is impossible honestly to blame the Tory Chancellor for the fact that the Labour-created economic slump has proved far worse than he dared to fear three years ago.


Osborne was not responsible for the near-collapse of Britain’s financial sector, a larger part of this country’s economy than are its counterparts in the United States and in Europe.


It is hard to hold him accountable for the fact that much of the country, and the entire public sector, resists tooth and nail desperately needed cuts to state expenditure. He deserves full credit for sticking to his guns, imposing a further one per cent pay limit on public sector workers.


He was also right to emphasise one big piece of good news: state sector job cuts are more than compensated by almost miraculous growth in private sector employment.


It was the juvenility of Labour’s crowing in the Commons yesterday that seemed so contemptible.


When the history of these times is written, the global economic crunch which began in 2008 will almost certainly be judged the most serious crisis of our lifetime. It has impacted far more gravely on hundreds of millions of people than anything Al Qaeda has done.


The threat to the economies of the West — and the eurozone faces difficulties as least as serious as our own — require from politicians statesmanship and courage of a high order. David Cameron and George Osborne and their colleagues often fall short. Campaigning for gay marriage while Rome burns scarcely promotes public respect.


But most of us recognise the Coalition’s leaders as intelligent and decent men, doing their best.


Their Labour counterparts, by contrast, seem incapable of grasping the magnitude of what is happening.


They play children’s games and make children’s faces even in the midst of the Budget debate. Ed Balls is a thuggish relic of 20th century socialism, who has forgotten nothing and learned nothing.


There is a serious danger that, as this economic crisis drags on — which will happen, whatever George Osborne does — many British people will lose patience and turn against business, wealth and capitalism, as have the French.


The Socialist President Francois Hollande is implementing just the sort of bungling, doomed, keep-spending-and-bash-the-rich policies that Balls will run if he becomes Britain’s Chancellor.


France’s finance minister said without embarrassment this week that he is less interested in cutting public spending and shrinking his country’s bloated welfare state than in raising more tax revenue from ‘big companies and the wealthy’. The latter are, of course, fleeing France as its economy totters.


This could happen in Britain.


Back in the 1950s, Wilfred Pickles fronted a radio gameshow of which the catchphrase to his sidekick was: ‘Give ’em the money, Mabel,’ Labour’s economic policy amounts to a reckless intention to invite Mabel to hand over tens of billions the country cannot afford to its payroll vote and increase taxation.


By contrast, George Osborne may have made mistakes and got his forecasts embarrassingly wrong, but he remains courageously committed to the towering objective of reducing our dreadful national deficit.


The fact that his Budget is most unlikely to produce a dramatic surge in growth reflects chiefly the legacy he inherited, and the huge forces buffeting Western economies, more than his own failures.


KBO (‘Keep Buggering On’) was Churchill’s slogan. Osborne is faced with running his Chancellorship on the same principle.


Back in 2010, before he took office, he often said wryly that the shocking mess he was to inherit at the Exchequer would probably destroy his political career. This could well prove the case.


If he and David Cameron were not so close, a change of Chancellor would soon seem politically essential.


As it is, however, they sink or swim together.


This week’s Budget is unlikely to win many votes, but it reflects Mr Osborne’s dogged and honourable commitment to restoring Britain to solvency.


Voters will see many temptations to reject the Tories and, indeed, their Chancellor, in 2015. But we must never forget that the only alternative government on offer will be led by Miliband and Balls.

And their best offer to the British people is a ticket to economic perdition.