Owen Paterson proves a gale of fresh air in Westminster

From badgers to horsemeat, Owen Paterson, the Environment Secretary, is showing the merit of experience in running a notoriously difficult Government department, Christopher Booker finds.

It was quite a week for Owen Paterson, our Environment Secretary, who is winning himself a reputation not just as one of the more colourfully controversial ministers in this Government but also as one of the most energetic and effective.

Last Sunday, after trundling a horsebox across England to help his daughter ride at a horse trials event, Mr Paterson flew to Brussels to play a leading role in one of the most important meetings of EU agriculture ministers for years.

Although scarcely noticed by the British media, it consisted of two days of gruelling negotiations to decide the future shape of the EU’s Common Agricultural Policy.

“In particular,” says Mr Paterson, “I was determined to fight off strong pressure from various of my continental colleagues for a move back to the bad old days of 'production subsidies, butter mountains and wine lakes’.”

In addition to discussing hundreds of pages of dense technical documents put before ministers from 27 countries, he was also determined to raise the controversial issue of neonicotinoids, the chemicals blamed by environmentalists for damaging Europe’s bees.

“Last weekend,” he says, “my office was swamped with 80,000 emails all protesting in identical terms at my insistence that these pesticides should not be banned by the EU until proper scientific evidence was available from field studies currently being analysed as a top priority by my technical staff at Defra [the Department for Environment, Food and Rural Affairs].”
His pragmatic, common-sense line won support from many of his EU colleagues.

Over lunch on Tuesday, however, Mr Paterson and his senior officials were taken aback when the Italians and French sprang an ambush by proposing a change to an arcane clause in an EU regulation.

“If they had got their way, this would have cost British taxpayers an extra £250 million a year — taken off our EU budget rebate,” he says.

“This set off an afternoon of frenzied telephone calls between Downing Street, Dublin, Paris and Rome to sort out what looked like a pretty underhand bid to overturn a point which we thought had been firmly agreed between David Cameron and Brussels only a few days earlier.”

The talks ended late that evening and Mr Paterson caught the dawn plane back to London for an 8am Cabinet meeting to hear George Osborne setting out his Budget proposals for later that day.

On Thursday and Friday, breaking off from non-stop meetings and speeches to attend the installation of the new Archbishop of Canterbury, Mr Paterson found himself facing an astonishingly abusive flood of tweets and messages on the internet, led by Bill Oddie and by Dr Brian May, the animal-welfare activist, attacking him very personally for everything from his policy on badger culling to his support for fox hunting.

In a long rant from Mr May, which he added to several times through the day on Friday, while Mr Paterson was addressing the annual conference of the Federation of Small Businesses in Leicester, he accused the Environment Secretary of being cruel, cold-hearted, unethical, undemocratic and unscientific as he implored animal-lovers across the land to sign up to the Team Badger petition, calling for a halt to the planned cull of badgers infected with bovine TB.

On Saturday, having finally got home to Shropshire, Mr Paterson ended his week by spending much of the day out in the fields, where he and his wife, Rose, keep a flock of sheep, helping to save dozens of new lambs as they were born into a world covered in a foot of snow.

When, last September, Mr Paterson was promoted to run Defra from the comparative obscurity of his years as Secretary of State for Northern Ireland, he was billed as “the unknown Cabinet minister”.

Since then, not a week has gone by when he has not made headlines, as he has had to step into one crisis after another: from dying ash trees to dying bees, from badger-culling to the furore over horse meat fraud.

He has also attracted attention for his robust views on other issues, from his opposition to gay marriage and his wish to see a return to the proper fox hunting he used to enjoy, to the wind farms he has long opposed as “a hideously expensive blight on the countryside, serving very little practical purpose”.

In at least three respects, it was an inspired move by Mr Cameron to appoint Mr Paterson to head a department with an almost absurdly wide range of responsibilities, from farming and fisheries to food safety and flood defences, from waste disposal to water policy.

First, it might have seemed counter-intuitive to put the most trenchant Eurosceptic in the Cabinet in charge of the ministry that more than any other in Whitehall is subject in almost all it does to policies and laws decided in Brussels.

In fact, Mr Paterson, who speaks French and German, knows and loves Europe and its peoples as well as any British politician — but he also knows much better than most how our European system of government works.

It was this that, when the horse meat scandal erupted in January, enabled him to see at once that the real problem was the way the system of regulations introduced by the EU after it took over responsibility for food safety in 2002 was “a standing invitation to fraud, because it forces everyone to rely on a paper trail rather than on rigorous inspections”.

It was because he had done his homework that Mr Paterson was able to take the lead in Brussels in trying to tackle the problem, working closely together with Simon Coveney, his Irish opposite number, and Tonio Borg, the EU’s health commissioner.

He was the first politician to talk to Europol, supported by the French and the Irish, because they were in the best position to coordinate a thorough investigation into what has become a Europe-wide fraud epidemic.

When Mr Paterson referred in speeches to the regulation that he saw as the root of the problem, 178/2002, he was so far ahead of the field that it left Mary Creagh, his Labour opposite number, floundering in trying to portray him as no more than a dithering accomplice of the food industry.
Secondly, Mr Paterson is the first Defra secretary to know and love the countryside.

“One thing you learn is that for wildlife to flourish, it has to be managed. Unless we manage streams and rivers, they get choked and wildlife dies. Unless we control dominant species, predators take over and kill everything else off.”

On no issue has Mr Paterson aroused more bile from the green lobby — as in last week’s stream of abuse from Mr Oddie and Mr May — than his support for properly targeted control of the badgers that have become such a threat not just to the cattle they infect with bovine tuberculosis, at a cost to taxpayers of £100 million a year, but also to many other forms of wildlife, from hedgehogs and bumblebees to ground-nesting birds.

Indeed, the third reason why Mr Paterson is such an ideal choice for the job is that he is in all things a pragmatist, who likes first to examine all the evidence and then to take decisive action.
“I know about badgers,” he says, “because I really studied this problem in the days between 2003 and 2005 when I was shadow spokesman on agriculture.

“I put down 600 parliamentary questions [the largest number ever tabled by an MP on a single subject] and I could see that in every country which had managed to crack the problem of TB in cattle, the answer lay in culling the wildlife species which were the main carriers of the disease.

“In New Zealand it was possums, in Michigan it was white-tailed deer — just as it had been in Britain back in the days when we eliminated TB in our cattle herds by controlling badger numbers.
“No one could be fonder of badgers than me,” he insists, as the only MP who can claim to have kept two orphaned badgers as pets when he was a boy.

“But what is really sad about these people who are so fanatically opposed to culling is that they can’t see that the horrible disease of TB is just as much of a problem for the badgers themselves as it is to cattle.

“Soon after I became Secretary of State, the NFU asked me to halt the badger culls because it was too late in the year to conduct them scientifically.

"But I am determined to see them carried through now, because unless we get on top of this disease, it will continue to be a tragedy for the countryside, for the farmers, for wildlife in general and for all those sick badgers otherwise condemned to a long and very painful death.”

Since taking over at Defra, Mr Paterson has moved decisively on one issue after another. He took a grip on the threat to our ash trees, by halting imports and ordering an exhaustive survey of the countryside “so that we can get a really accurate picture of what we are dealing with”.

He has taken action on flood defences and fracking, just as he has tried to lead the way in Europe on the horse-meat scandal and food fraud.

Another issue due to make headlines will be a major Bill on Britain’s water policy, soon to come before Parliament.

“It is vital that we find ways to reverse the tendency in recent years to charge customers ever more for water while supplying them with less.

"We desperately need to build more reservoirs to store all that water which keeps falling out of the sky — contrary to the long-fashionable belief that, thanks to global warming, we can expect nothing in the future but endless droughts.”

Mr Paterson smiles as he says this. In private he laughs a lot and is much more genially relaxed than he sometimes appears to be in public. And, of course, his pragmatic scepticism about climate change, like his enthusiasms for shale gas and GM crops, is yet another reason why he has become such a hate figure for the green pressure groups.

He enjoys the irony of the fact that, as a practical environmentalist, he is demonised by fanatical ideologues who know rather less about nature and the environment than he does — just as he does in being the pragmatic Eurosceptic who knows considerably more about how the EU system of government works than those ideological Europhiles like his Labour opposite number, for whom “Europe” is little more than “a cosy abstract idea”.

His driving force is “make sure you look at all the evidence, only then can you take the right effective action”.

In that sense, as one of the few politicians with practical experience of running a business out in the real world — he was head of the family leather firm and president of the European Tanners Confederation — Mr Paterson is a true rarity in contemporary politics. He has also in the past eight months blown through Defra like a gale of fresh air.

Whatever else may be said of Mr Cameron, in this instance he put the right man in the right place. 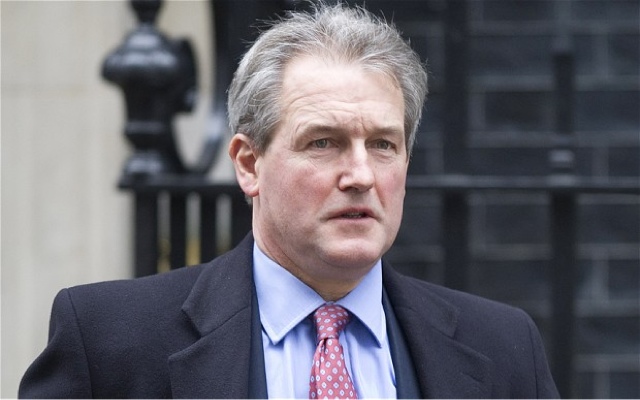