Police detained a lone yachtsman under the Mental Health Act after paramedics, a rescue helicopter, the RNLI and coastguards were all involved in a 12-hour rescue.
The 65-year-old sailor, who has not been named, was detained by police who deemed him not to be of sound mind.
The man issued a Mayday call after his 36ft boat, named the Mary Celeste, hit rocks off Eastbourne East Sussex on Friday.
He first got into difficulty in heavy seas off Bexhill at about 10.05am. The man initially did not want help despite the 'atrocious weather’ which worsened the situation.
Dover Coastguard received erratic radio communications from the vessel which had drifted dangerously close inshore and requested the volunteer RNLI crew to investigate.

Lifeboats approached the boat but the skipper initially refused to make contact. Coastguard officers had to negotiate with the sailor, who refused their offers to help

Coastguards monitored the progress of the yacht throughout the day and became increasingly concerned for the safety of the man.

Weather conditions deteriorated and in driving rain and gale force winds a ‘Mayday’ distress call was received at 8.05pm by Dover coastguard from the yacht which had run aground on the beach below South Cliff Tower.
Rescuers were initially unable to approach the yacht due to the low tide and breaking surf.
Lifeboat coxswain Mark Sawyer requested the assistance of the coastguard rescue helicopter with the hope of winching the yachtsman from the boat.
The vessel was eventually driven further up the beach by the tide where it could secured by coastguard officers. 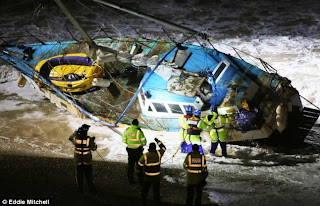 An Eastbourne RNLI spokesman said: ‘The drama started on Friday morning when the Eastbourne all-weather lifeboat was launched at the request of Dover Coastguard when it was apparent that a lone yachtsman was in difficulties off Bexhill.

'Whilst the lifeboat stood by, negotiations took place between coastguard officers and the skipper which eventually resulted in the lifeboat being stood down, the skipper abjectly refusing all offers of assistance.

‘Eastbourne all-weather lifeboat was scrambled and under way within a few minutes of the [Mayday] request to launch. Guided to the location by red distress flares fired from the yacht, the lifeboat was soon on scene.

'The yachtsman was then assisted through the surf and taken into the care of the police and ambulance.'

A police spokesman said: 'A man was detained under the Mental Health Act because he was deemed not to be of sound mind.

'He was taken to Eastbourne District General Hospital before being taken into custody at Eastbourne at 8.14am to be assessed by a qualified medical practitioner.

East Sussex County Council have hired a security firm to ensure the safety of the boat until it can be collected on Monday.
Read more: http://www.dailymail.co.uk/news/article-2294336/Pictured-Moment-skipper-detained-ignoring-warnings-coastguard-running-yacht-aground-gale-force-winds.html#ixzz2NsxxMoWZ
Follow us: @MailOnline on Twitter | DailyMail on Facebook 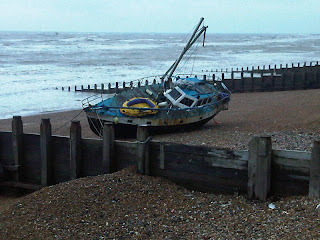 Thanks must also go to officers from Eastbourne Borough Council who have arranged action to ensure that fuel and other hazardous materials were not able to leak onto the beach or contaminate our coastline.

Posted by Cllr Patrick Warner at 03:27