The fate of the Falklands is in the islanders' hands

With the world watching, the people of the tiny British Overseas Territory go to the polls to make history

Lunchtime in Port Stanley, and the road-sweeping truck is proceeding slowly down Ross Road, the main thoroughfare of the Falkland Islands. There is no litter for it to suck up, none at all in this neat corner of suburban Britain transplanted to the far side of the world, but the driver sticks to his task assiduously, until the sweeper disappears round the bend taking it towards Government House and the old Royal Marine barracks at Moody Brook.

There is a lot of traffic for the time of day. No fewer than four four-wheel drives pass within a few minutes. When they have gone, the silence returns, broken only by the lapping of water and the faintest breath of wind.

The Falklands oscillate between complete backwater and centre of international attention. The parish-pump politics of this craggy imperial remnant can transmute overnight into the subject of fraught debate at the United Nations. So it has been with the two-day referendum that will take place on Sunday and Monday, during which some 1,700 eligible voters will be asked to answer yes or no to the question: “Do you wish the Falklands Islands to retain their current political status as an Overseas Territory of the United Kingdom?”

The result is a foregone conclusion, but there will be plenty of people in Argentina and elsewhere looking for the slightest crack in the islanders’ loyalty to the mother country. Lots of journalists are paying attention, too. In addition to the British media contingent, some 50 are expected to fly in from Chile on Saturday, including television crews from Japan, Russia and Latin America. With them will be a contingent of electoral observers from Mexico, Chile, Paraguay and Uruguay who have agreed to join a Canadian-organised monitoring process.

Juan Manuel Henao, the American deputy head of the Referendum International Observation Mission, says: “It is a conscious decision to secure observers from the (Latin American) countries. The Falkland Islands are a Latin American issue and it is important for these observers to vouch for the process and draw their conclusion about what has gone on here.”

The Falkland Islands Government sees the observers as essential in ensuring the legitimacy of a process that began with a conversation between two members of the islands’ elected assembly during a cigarette break, and which has now become an international issue, affecting relations between Britain and America, and arousing the wrath of Cristina Fernandez de Kirchner, Argentina’s combustible president.

“A colleague, Gavin Shaw, and I were having a chat,” explains Dick Sawle, one of the assembly members behind the referendum. “It was a couple of years ago and we raised it with colleagues, and I suppose we weren’t that convinced. Then, when the Argentine pressure on the Falklands increased under Kirchner, we revisited the idea. And the more we thought about it, the more we thought it was a good idea.”

But why vote on a question that few, if any, islanders are going to answer in the negative?

“It gets us out of the old bipartite 'possession’ debate between Argentina and Britain,” says John Fowler, a journalist on the islands’ newspaper, Penguin News. “Who owns the Falklands? Well, we, the Falkland Islanders, own the Falklands, actually. We have a historical and mutually loyal relationship with Britain, but we are not part of the United Kingdom.”

Those behind the vote, costing £75,000, believe it will undercut Argentina’s stated position, that the islands’ inhabitants enjoy no separate political identity. As a “non-indigenous” people, so the line from Buenos Aires goes, the islanders, known as Kelpers, have no right to decide their fate. This conveniently ignores the fact that many of those voting can trace their presence in this part of the world back to the 1830s and 1840s, when the ancestors of a good part of Argentina’s population were sitting at home in Spain, Italy, Syria and elsewhere.

David Cameron has backed the referendum enthusiastically, but he has failed to gain support for the exercise from the United States. John Kerry, the US Secretary of State, sat firmly on the fence during his inaugural visit to London, restating Washington’s policy that, while it recognises de facto British control of the islands, it takes no position on sovereignty. The referendum is an embarrassment for the Americans, who are happy to sound the trumpet of self-determination when it suits them, but prefer not to let it impede relations with South America’s second-most important country.

The vote is pushed strongly in the Falklands for fear of a poor turnout that could send the wrong signal to the world. One poster has Mr Sawle pointing his finger, Kitchener-like (not to be confused with Kirchner-like) towards passers-by, while announcing “Your Country Wants You To Vote Yes”. The Yes-vote campaign is in full swing, despite the marked absence of a No counterpart.

“Grass roots” events are planned for the next few days, including the spelling out of a giant “Yes” by four-wheel drives on the Camber, a stretch of land opposite Stanley on the far side of the harbour. Historically, the site has been used by the Royal Navy and other ships’ crews to commemorate their vessels with names spelt out in giant lettering. A briefing in Penguin News tells islanders to put on a good show for the media.

“When you pass journalists, open your window, smile, wave or give the thumbs-up,” it implores. “Face-painting, especially with children, is encouraged. Please bring your flags.”

Since the war in 1982, one that saw a British force eject 11,000 Argentinian invaders, the islanders have become good at PR. They have also become wealthy on the back of licences issued to foreign companies wanting to exploit the rich fisheries around the islands. The quasi-feudal system that existed prior to 1982, in which a few absentee landowners controlled the economy, has given way to a vibrant, modern economy. And now there is oil, possibly on the scale of the North Sea. Investment is pouring in, despite Kirchner’s megaphone diplomacy, warning of sanctions against those who do business with the islands.

Independence is now being talked about openly, but as a distant goal dependent on the removal of the Argentinian threat. Until then, the British and the military protection they provide are needed. Says Mr Fowler: “Maybe we have been goaded into a referendum a little bit by people who justifiably say, 'Look, in the present situation, you have the best of both worlds. You are supported by Britain militarily, but you are not paying British taxes and you are actually better off than Britain. Come on, grow up a bit.’ ”

Some islanders are wary about rocking the boat with a vote, despite support from Downing Street. “There are people here, particularly from the older generation, who feel even talking about independence shows disloyalty to Britain,” says Mr Fowler.

But the signs of a more distant relationship are there to see. When arriving at Mount Pleasant Airport, the base built at enormous cost to defend the islands, British visitors must submit landing cards and customs forms. Those voting in the referendum must have been accepted for permanent residency after spending seven years here. There are two flags, too, the Union flag and the Falkland Islands Ensign, which flies outside government buildings.

On Sunday morning, one of the Islander aircraft of the Falkland Islands Government Air Service will take a ballot box to the remote communities around West Falkland, while mobile voting stations fan out across East Falkland. The thing about this event, though, is that it will settle precisely nothing. Self-determination is an implicit right of British Overseas Territory status, so a Yes or No vote to Britannia’s rule will still leave open the possibility of an independent Falklands. Argentina, meanwhile, is unlikely ever to drop its claim to an archipelago that occupies a strange but central place in its national myth.

The interest on Monday night will be in that rare species, a No-voter. “There will always be a few people to vote no, for all sorts of reasons, really,” says Mr Sawle. “I suppose there is a small number of people who think by voting No, they are voting for independence.”

Mr Fowler is more concerned by apathy than a significant No vote. “What worries me is if people don’t come out to vote,” he says. “There is a bit of resistance here to the notion that people are being pressured to vote.”

Leif Pollard, a fifth-generation islander, sees the referendum as an essentially simple exercise. “It will educate the rest of the world as to the way we feel,” she says, “that we want to remain a British Overseas Territory and not a colony of Argentina.”

Mr Fowler hopes for something more, the beginnings of nationhood. “We are one hundred per cent certain about one thing, and that is that we do not want to be Argentine. But you don’t want to define yourself by a negative. This referendum has done two good things: it has politicised a generation which was not politicised, and allowed us to begin the debate about who we want to be.” 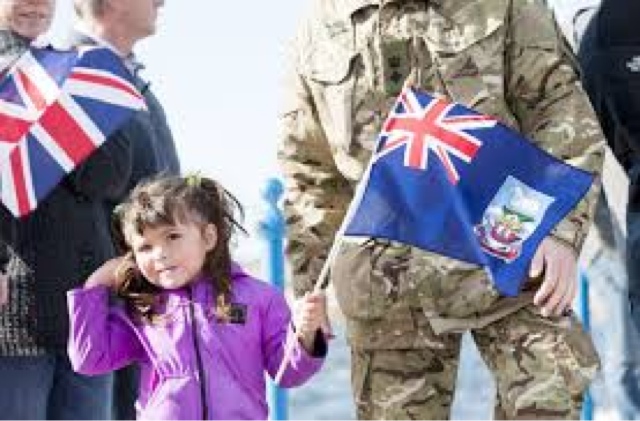