'Crossrail for bikes' set for London

London is to get a "Crossrail for bikes" as part of a £913m investment plan in cycling, the mayor announced. 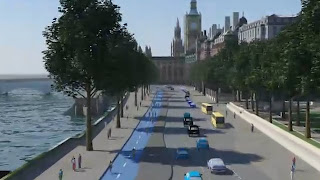 The route is expected to open in 2016 and could run for more than 15 miles (24km) through the western suburbs, central London and Barking.

It will use a Dutch-style segregated cycle track along places like Victoria Embankment and the Westway flyover.

But only £300m is guaranteed until 2015 after which Mayor Boris Johnson said the government will review the funding.

Mr Johnson said although he was sure the government will see the "massive economic benefits" of the scheme, funding for all infrastructure projects will be reviewed by the government.


The London Assembly welcomed the plan but the transport committee chairwoman said £913m was not enough.

As part of the "cycling revolution" some dangerous junctions, such as those at Blackfriars and Vauxhall, will also be redesigned.

Over the next four years, the cycle routes will be created and run parallel to Tube lines and bus routes.

Mr Johnson said: "I want to make it normal, something for everyone, something you feel comfortable doing in your ordinary clothes. Our new routes will give people the confidence to get in the saddle.

"I want to de-Lycrafy cycling," he added.

"I do not promise perfection, or that London will become Amsterdam any time soon. But what I do say is that this plan marks a profound shift in my ambitions and intentions for the bicycle."

Additional measures being investigated include encouraging haulage companies to undertake out-of-hours deliveries and monitoring the experience of cities which have banned lorries from certain parts.

Sir Peter Hendy, Transport Commissioner for London, said: "These policies are a step-change in cycling provision, and I commit TfL to delivering them as one of its highest priorities." 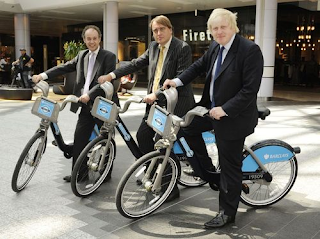 Campaigner from IBikeLondon, Mark Ames, said: "This is a real kind of change in the way the mayor is delivering cycling infrastructure and in that sense I feel cycling campaigners feel quite victorious.

"We really persistently badgered Boris in the run-up to his re-election and now he's delivering on his pre-election promises."

The first "Quietways" could open next year, with the improved Superhighways and the central section of "bike Crossrail" expected to be completed by 2016.
Posted by Cllr Patrick Warner at 02:41