The University of Sussex has been granted an injunction to end a six-week occupation by students.

The university said it took action in the High Court after a "violent protest" on Monday led to damage at the Falmer campus just outside Brighton.

It said staff felt intimidated and had to be escorted from their building by security staff.

A student spokesman disputed the protest, over plans to outsource 235 jobs, was violent.

He said students were continuing to occupy Bramber House.

The occupation began in a conference room on 7 February following a 300-strong staff and student protest over proposals to outsource the jobs,

University officials granted open access to the building between 08:00 and 22:00 GMT, while a number of high profile speakers and notable academics gave talks.

On Monday, students, staff and supporters from universities around the UK congregated to show solidarity with hundreds of their Sussex counterparts.

The students claimed there were nearly 2,000 protesters, the majority from Sussex.

The university said it had tolerated the sit-in because there had been no undue disruption but it had become increasingly concerned about the attitude of the occupiers.

It said protesters smashed glass doors at the entrance to the main administration building, Sussex House, and damaged documents, fire alarms and CCTV cameras and daubed slogans on interior walls.

In Bramber House, the occupiers broke doors and occupied seminar rooms that would normally be used for teaching and learning.

"We have now embarked on this legal process to prevent a repetition of the type of violent protest we saw at Sussex House on Monday and to pave the way to ending the occupation," said registrar and secretary John Duffy.

The student spokesman it was misleading to say the protest was violent.

"There is no evidence of any violent protest taking place, though there may have been some damage," he said.

"The injunction is a clear sign from the university that they are not going to allow protests to take place.

"This is hugely worrying." 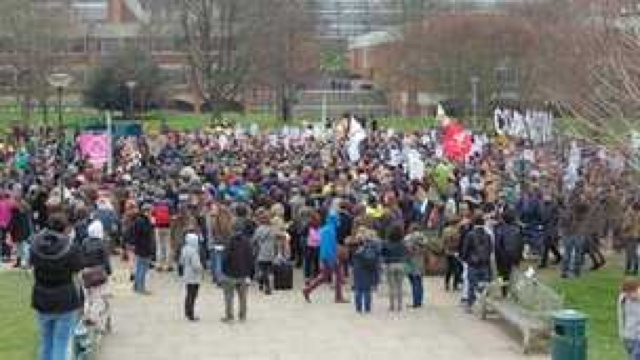 Posted by Cllr Patrick Warner at 06:11