A Senior Eurocrat launched an extraordinary attack on David Cameron last night over his attempt to loosen ties with ­Brussels. 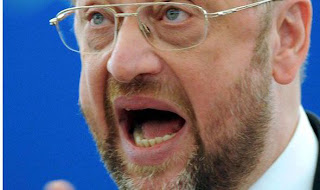 Martin Schulz, president of the European Parliament, claimed the Prime Minister’s drive to renegotiate the UK’s membership deal with the European Union could lead to “the break-up of the union”.
And he claimed Mr Cameron’s proposed referendum on a new membership deal with Brussels was “a dangerous game”.
Mr Schulz’s rant came in an article in the magazine Public Service Review Europe.
It follows Mr Cameron’s pledge to renegotiate the terms of Britain’s membership of the EU and hold an in-or-out referendum by 2017 if he wins the next election.
Mr Schulz wrote: “Any attempt by the UK government to repatriate powers to Westminster is likely to be a drawn out and ­cumbersome negotiation.
“I would question whether it is truly in the British and European long-term interest.
“However attractive repatriation may seem on the surface, it would involve long and complex procedures with no guarantee of a favourable outcome.
“Renegotiation is a two-way process where no artificial deadlines can be imposed by one side.”
Mr Schulz, a member of Germany’s Left-of-centre Social Democratic Party, urged Tories to drop their “adversarial stance” towards the EU.
He accused Mr Cameron of playing “a dangerous game for tactical, domestic reasons”.
He said Mr Cameron “increasingly resembles the Sorcerer’s Apprentice, who cannot tame the forces that he has conjured – forces that want to leave the EU for ideological reasons, to the detriment of the British people”.
Mr Schulz argued that looking at the terms of EU membership “and picking and choosing the bits of which the UK approves, sets a dangerous precedent”.
He added: “It could lead to piecemeal legislation, disintegration and potentially the break-up of the union.
“The eurozone is integrating more deeply and more rapidly out of necessity. The UK has chosen to remain outside the euro. The UK’s support for deeper integration of the eurozone is welcome but doing so from outside means the eurozone cannot and will not be shaped according to British interest.”
Warning Britain against further attempts to undermine European unity, Mr Schulz said: “It is not in the UK’s interest to seek to downgrade to some kind of ‘second class’ EU membership and so choose to weaken its own influence on European and global affairs.
“We need a UK as a fully-fledged member, not harbouring in the port of Dover.”
Tory MP Douglas Carswell said: “If he wants to start invoking the spirit of Harry Potter, then I think he would make a good ­Voldemort. I am campaigning for Britain to leave the EU and Herr Schulz is making my job persuading ­the undecideds a heck of a lot ­easier.”

Via www.express.co.uk
Posted by Cllr Patrick Warner at 13:57