Poll found half of members are dissatisfied with performance as leader, while Vince Cable is their favourite of the party's ministers.

Nick Clegg’s ratings amongst Liberal Democrat activists have slumped as some party members question whether he should stand down as their leader before the next general election.

After the Lib Dems’ victory in last month’s Eastleigh by-election, Clegg allies said he was certain to lead his party into and beyond the 2015 poll. But some grassroots activists want to install a new leader, such as Vince Cable, the Business Secretary, before the election.

A survey of 650 party members by the Lib Dem Voice website found that 50 per cent are dissatisfied with Mr Clegg’s performance as party leader, a rise of nine points since December. The proportion satisfied is 48 per cent, 10 points down on December.

When party members were asked to rate Lib Dem ministers, Mr Clegg surprisingly came in the bottom five. Some 46 per cent are satisfied with his performance as Deputy Prime Minister, while 44 per cent are dissatisfied, a net rating of plus 2 points.

However, 78 per cent of Lib Dem activists support the coalition with the Conservatives, while only 18 per cent oppose it.

Naomi Smith, co-chair of the Social Liberal Forum pressure group, said: “The results will make difficult reading for the Deputy Prime Minister. The party faithful have delivered a clear message – they continue to support the Coalition Government but not under the current Lib Dem leadership.” She believed Mr Clegg’s rating would have been even lower if the poll had been taken after his “deeply unpopular” speech on immigration last Friday.

Clegg allies hit back. A senior Lib Dem source said: “The stunning victory in the Eastleigh by-election vindicated Nick’s political strategy that the Lib Dems can both be in government and win. The survey clearly demonstrates continued widespread support among Lib Dems to both being in coalition and the overall direction of the party. Despite what our opponents would want, our party remains united behind his message – building a stronger economy and a fairer society enabling everyone to get on in life.”

Mr Cable tops the Lib Dems’ popularity chart. Some 80 per cent of members are satisfied with his work as Business Secretary, while only 10 per cent are dissatisfied, a net rating of plus 70 points. The finding suggests Mr Cable would be the strong front-runner to succeed Mr Clegg if he stands down before the election, as a new leader would be chosen in a ballot of members.

Others in the top five are Lynne Featherstone, the International Development Minister; Steve Webb, the Pensions Minister; Ed Davey, the Energy Secretary and Michael Moore, the Scotland Secretary. Others joining Mr Clegg in the bottom five are Jeremy Browne, the Home Office Minister; David Laws, the Schools Minister; Lord McNally, the Justice Minister and Baroness Randerson, a minister at the Wales Office.

Clegg allies pointed out that the survey was taken soon after the party’s spring conference voted against the Government’s plans to allow civil courts to take some evidence in secret. Mr Clegg’s handling of the issue has faced grassroots criticism.

Activists suggested the survey may reflect recent controversies such as the allegations that Lord Rennard, the party’s former chief executive, sexually harassed women activists, which he denies.

By Andrew Grice, The Independent. 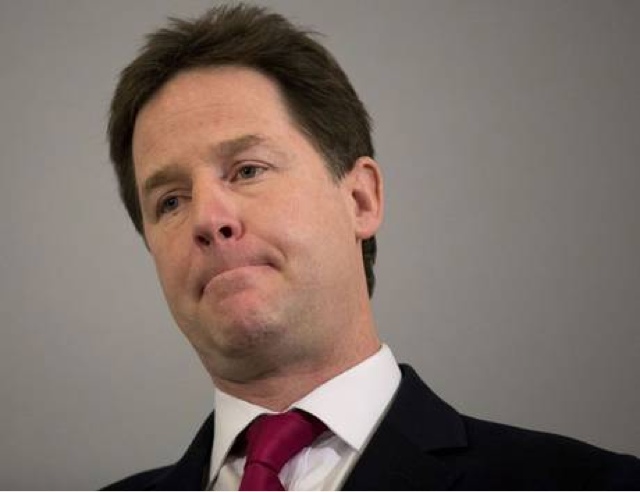 Posted by Cllr Patrick Warner at 15:24