The president of Argentina has written an open letter to David Cameron calling once again for him to relinquish British control of the Falkland Islands.

The letter by Cristina Kirchner has appeared as an advertisement in The Guardian newspaper and says Argentina was forcibly stripped of the islands her country calls Las Malvinas in a "blatant exercise of 19th-century colonialism". 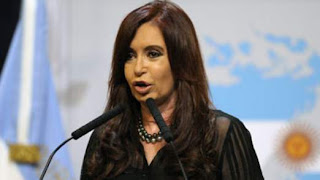 The 59-year-old president urged the Prime Minister to abide by United Nations resolutions she says back the Argentinian cause.

Ms Kirchner first made calls for the return of the islands during last year's 30th anniversary of the two countries going to war.

"One hundred and eighty years ago on the same date, January 3, in a blatant exercise of 19th-century colonialism, Argentina was forcibly stripped of the Malvinas Islands, which are situated 14,000km (8700 miles) away from London," she said in the letter, copied to United Nations secretary general Ban Ki-moon.

"The Argentines on the Islands were expelled by the Royal Navy and the United Kingdom subsequently began a population implantation process similar to that applied to other territories under colonial rule.

"Since then, Britain, the colonial power, has refused to return the territories to the Argentine Republic, thus preventing it from restoring its territorial integrity.

"The Question of the Malvinas Islands is also a cause embraced by Latin America and by a vast majority of peoples and governments around the world that reject colonialism." 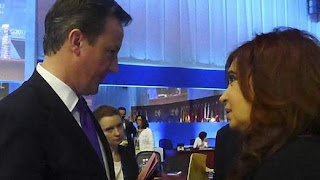 Mr Cameron and Ms Kirchner clashed over the Falklands when the pair came face-to-face at the G20 summit in Mexico last June.

He rejected her demand for negotiations over the sovereignty of the islands and told her that she should respect the result of a referendum due to be held in March, when the Falklanders will vote on whether they wish to retain their ties with Britain.

The Argentine president had earlier taken her demands to the United Nations, appearing at the annual meeting of the little-known UN Decolonisation Committee on the 30th anniversary of Britain's ousting of an Argentinian invasion force from the Falklands.

She used the occasion to reiterate Argentina's opposition to any more wars and to criticise the Prime Minister's decision to mark the day by flying the Falklands flag over Number 10.

The area, which makes up around a third of the British Antarctic Territory, is also claimed by the South American country.

A Foreign Office spokeswoman said the Falkland Islanders "are British and have chosen to be so".

"They remain free to choose their own futures, both politically and economically, and have a right to self-determination as enshrined in the UN Charter," she added.

"This is a fundamental human right for all peoples.

"There are three parties to this debate, not just two as Argentina likes to pretend.

"The islanders can't just be written out of history.

"As such, there can be no negotiations on the sovereignty of the Falkland Islands unless and until such time as the islanders so wish."

If I were Argentinian, I think I'd be far more concered with inflation that is running at over 20%!
Posted by Cllr Patrick Warner at 02:50