Hollande's France is a preview of Miliband's Britain

To see what a future Miliband government would look like we do not need a crystal ball, we simply need look across the Channel

For all the rhetoric we hear about how Ed Miliband is not really a socialist and can be trusted on the economy, about how he recognises the need for cuts in public spending, Hollande may be the best example of what the reality of a Miliband-run Britain truly is.

In the run up to Hollande’s electoral success, Miliband and the now French President made great play of their closeness on policy issues.

In fact, this is what Miliband had to say when he met Hollande in Paris:

“I think it’s a significant moment… What does the Left have to prove across Europe and indeed in Britain? … That we are the people who can work well in the tough times as well as in the easier times. That’s what he is trying to show in France, and that is what we are trying to show [in Britain]''.

The similarities between the two run deeper than kind words between sister parties. Both believe that what they term 'neo-liberalism' has failed and that the time for the state to come and manage capitalism has come.

Both believe that the economy can be moulded by politicians into ‘desirable’ shapes of fairness or social justice. Ed Miliband has said so much himself: “I'm arguing for a very big reshaping of the way our economy works.” This reshaping will include, among other things, a green industrial revolution.

"To attract the investment we need, governments must cover that risk and commit to a clear goal of decarbonising the power sector by 2030, as the independent Committee on Climate Change has recommended”, said the leader of the opposition. We have all become familiar with what comes with government ‘covering risk’, be it the iron lung of continued subsidies or the disastrous policies of guaranteeing loans which we have seen fail in the United States in cases such as the Solyndra affair.

Both parties have flirted with the idea of nationalisation too. In France we saw the Industry minister threaten the company ArcelorMittal with nationalisation outright, while in Britain Ed Miliband has vowed to take an active role in the energy market and has threatened banks that if they do not separate their retail and investment arms a future Labour government will "break them up".

And let us not forget that Ed Miliband, whilst not campaigning on a 75 percent top tax rate, has opposed the cut in the 50 percent top rate and said he would reverse it, has continuously proposed a bankers’ bonus tax, and is opposing the government’s welfare reforms.

FA Hayek once said, “The curious task of economics is to demonstrate to men how little they really know about what they imagine they can design.” Sage advice for politicians like Hollande and Miliband who are seemingly incapable of significant restraint when it comes to public spending or confiscatory tax rates. The purpose of both of their political lives is to be compassionate with other people’s money.

In fact there is only one real difference between Ed Miliband and Francois Hollande and that is that one is in office and can carry out his agenda whilst the other cannot.

Should Ed Miliband win the 2015 general election the consequence would be somewhat analogous to a drug addict winning the lottery. He simply would not be able to help himself from gorging on the productivity of the private sector to feed the Labour Party’s addiction to government spending.

2015 is still some time off but to see what a future Miliband government would look like we do not need a crystal ball, we simply need look across the Channel. 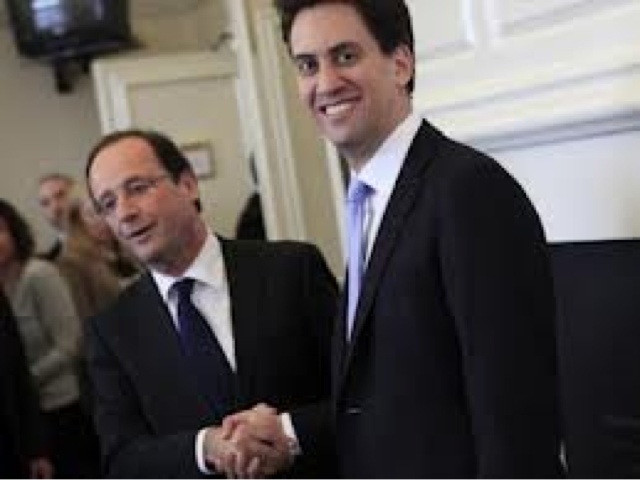 Posted by Cllr Patrick Warner at 22:23