It looks like Britain has a new 'Nasty Party'

We have long known how Liberal Democrats hate Conservatives and people who have worked hard and saved well to provide for their future and they have demonstrated this by their constant calls for people whom they class to be rich, to be taxed to the hilt.

Whilst it is fair that those in Britain who can most afford to help put the nation back on an even keel, should pay their fare share, the responsibility falls on everyone to make a contribution in a variety of ways. Those who have become dependent of the failed socialist benefit culture need to make every effort to get back to work, even if it means considering a different type of job than that which they may have done before or were originally trained for, they should also consider relocating if it gives them the chance to provide for their family and be less reliant on the state.

There is in my opinion nothing wrong with tax efficiency in business but how can it be right that huge companies pay no tax at all - both ends of the scale need to be tackled so that those strivers in what some call the squeezed middle are not bearing the brunt of putting things right.

But we also have a responsibility to choose future Government's wisely. Labour may claim that the mess they left was caused by an internation ill wind and it is true that some aspects may well have been but their 13 year spending spree and the fact that they left the coffers completely empty meant that they had nothing left to help us whether the storm. We shouldn't be surprised, it's always the same, everytime Labour run anything, it ends in tears and a mess has to be cleared up - lets not make the same mistake again!

Finally, back to the reasoning behind my nasty party comments and the Lib-Dems. Whilst scanning Twitter earlier today, I found a Retweet by a local Lib-Dem Councillor from their National Press Office. It follows a 12 days of Christmas theme and proudly boasts that "on the 11th day of Christmas... Lib-Dems have RAISED Council Tax on second homes" and encourages the message to be spread.

It doesn't stop there though, other posts include; INCREASED Stamp Duty on £2m mansions, taxed private jets to ensure the super-rich pay their fair share, raised Capital Gains Tax on the richest in society.

It seems that they take delight in penalising people they consider to be rich and sends totally the wrong message to those who we will depend on most for job creation and economic growth. Is it therefore any wonder that the Lib-Dems are quickly gaining the reputation for being the new Nasty Party in Britain? 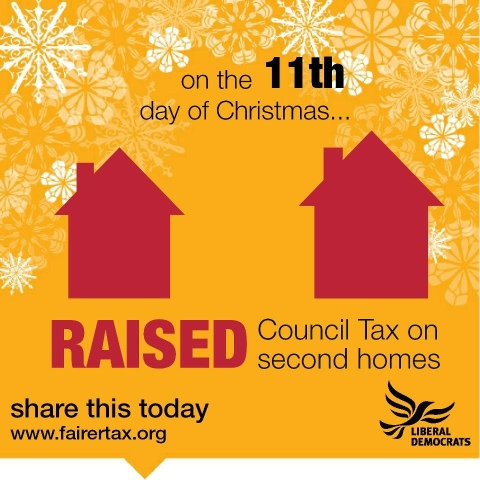 Posted by Cllr Patrick Warner at 03:34