After 25 years, 'Yes, Prime Minister’ is back. Original co-writer Antony Jay describes the process of bringing the series up to date

In 1983, Jonathan Lynn and I thought that Yes Minister was pretty much played out. After three series, enough was enough. What brought it back to life was the idea of making Jim Hacker prime minister. The premiership opened up a range of subjects – nuclear defence, MI5, foreign policy, the appointment of bishops – which kept us going happily for another two series.

By 1987 we felt that another series would have us scraping the barrel. We did discuss the possibility of a stage play, but Paul Eddington and Nigel Hawthorne could not commit themselves to more than three months, while producers needed at least six months to recoup their investment. So we called it a day; we were sure we would never go back to it.

But in the entertainment business, as in politics, the word “never” does not take the future tense. We had felt that any revival would be impossible without Paul and Nigel in their original parts – but Paul died in 1995 and Nigel in 2001, and after a few years, the idea of reviving the programme did not look as impossible as it had done in their lifetimes.

We were asked if we would like to adapt some old episodes for the stage. That seemed a bit boring. Why not write a completely new, updated play? We found an enthusiastic producer and in the spring of 2010 it went ahead.

I have to admit that I was apprehensive. I was haunted by Utopia Limited, the disastrous attempt by Gilbert and Sullivan to recapture their past glories, and by the description of these two pathetic old men appearing on stage at the first night to distinctly lukewarm applause for what was clearly a flop. Jonathan was 67 by then, and I was 80 – a dangerous parallel. However, history mercifully did not repeat itself, and the play has been running ever since, alternating London seasons with provincial tours.

We had not thought about another television series, but when the play proved so popular, the idea obviously came up. We did not really feel like going back on to the treadmill, but the idea of expanding the play into six half-hour television episodes was not so daunting. Obviously, it would not consist of free-standing episodes like the original series – it would have to be a six-part serial. But why not?

The BBC insisted on a pilot. We felt that we had already done 38 pilots, apart from the stage version, so we said no. But UK Gold did not want a pilot, so we said yes, and the result starts on the screen this month.

So how much had changed in the 23 years since the last episode of Yes, Prime Minister? We always hoped that the series would be seen as topical, but in fact the topicality was something of an illusion. There were two reasons for this. The first was that, although the series first went on the air in 1980 when Margaret Thatcher was prime minister, it was devised and commissioned in 1977. Jim Hacker could not have been less like Mrs Thatcher – we drew on the Heath/Wilson model, which happily came back in the Blair years in time for the play and the new serial.

The second reason was that the BBC paid so little for the scripts that Jonathan and I could not afford to write them close to transmission; we had to keep our day jobs. That meant we were often writing six months or more before transmission, so topical jokes were out. We had to draw on the permanently recurring problems and crises of government, which had the additional advantage of stopping the episodes from seeming dated. In fact, the incidents often cropped up again just before the show went out, which was a welcome bonus and reinforced the illusion of topicality.

So how different was government in 2010 from government in 1980? There was only one way to find out: research. This meant talking to politicians and civil servants; book research was always of limited value – insider books tended to be essays in self-justification and self-promotion – but a convivial lunch could spark all sorts of ideas. In fact, whenever we found that a plot we were developing was not funny enough, the answer was to do more research; the deeper you dug into the realities of government, the funnier it got.

And our research made it clear that there had been a lot of changes in the 23 years since our last script. To start with, of course, the technology had moved on – it was now a world of tweets, mobiles, laptops and iPads – though the ancient red boxes had still not been replaced. And the people were different, too. The civil servants had lost some of Sir Humphrey’s effortless superiority, though underneath the facade there was still the same patronising attitude to the amateurs who were their political masters.

There was more change in the politicians; back in the Seventies and Eighties many of them had a life outside politics, but now the majority seemed to have very little experience of life beyond Westminster. They had gone from university to jobs as political advisers and public relations consultants and then into Parliament without ever doing real jobs with real people.

And yet, underneath it all, everything was surprisingly unchanged. All sorts and conditions of men may enter politics, with all sorts of motives and purposes, but as they rise to the top, the remorseless logic of power drives them into the same pattern of behaviour. It is not only true of politics. As Bagehot pointed out 150 years ago: “The summits of various business are, like the tops of mountains, much more alike than the parts below – the bare principles are much the same; it is only the rich variegated details of the lower strata that so contrast with one another.”

What had changed, happily, were the issues that plagued the government. We had a welcome selection of new plot lines – financial meltdown, the euro crisis, Scottish independence, BBC antagonism, jobs for retiring permanent secretaries - to keep us going through six episodes.

It was this underlying continuity that made it easy for Jonathan and me to pick up where we left off. It may have been 23 years since we last wrote a script together, but it might just as well have been 23 days. We clicked straight back into the old routine. The rich seam of political hypocrisy was certainly not worked out.

In essence we were exposing the other half of a half-truth. The half displayed to the public was of public-spirited men and women ceaselessly and selflessly labouring for the good of the country and the welfare of their fellow citizens. The half we drew on for our comedy was of self-interested and self-important careerists preoccupied with status, power, publicity and money.

I must say that the MPs’ expenses scandal occurred at a very convenient time to support our version. And there was another half-truth that served us well – the image of docile civil servants loyally and efficiently carrying out the instructions of their masters; the half we displayed was of arrogant and manipulative bureaucrats obstructing ministers and ruthlessly pursuing their own objectives.

The central anomaly is that civil servants have years of experience, jobs for life, and a budget of hundreds of billions of pounds, while ministers have, usually, little or no experience of the job and could be kicked out tomorrow. After researching and writing 44 episodes and a play, I find government much easier to understand by looking at ministers as public relations consultants to the real government – which is, of course, the Civil Service.

'Yes, Prime Minister’ starts on January 15 at 9pm on Gold. The stage version is at the Trafalgar Studios, London SW1, until January 12 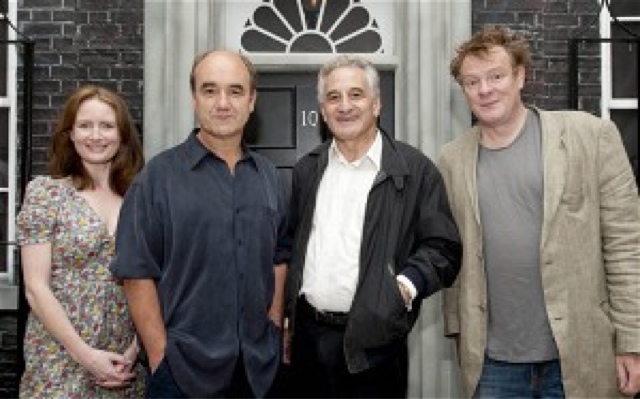 Posted by Cllr Patrick Warner at 01:26