Boris says; Thatcherism is no museum piece - it's alive and kicking

Britain could benefit hugely from the astral guidance of its heroic former prime minister. 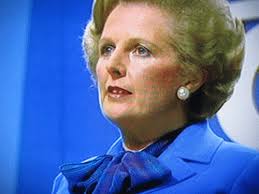 Ding dong, the Soviet Union is dead! Ding dong, communism is dead! And so is the British disease. They are all dead as doornails – the myth of this country’s inevitable decline, the habit of capitulating to the unions, the belief in state control of everything from motor manufacturers to removals firms, taxation rates at 98 per cent: all the Lefty nostrums of the post-war epoch.


Ding dong! Old Labour’s dead! The Labour Party has given up its ridiculous belief in the common ownership of the means of production, distribution and exchange – the slogan that used to be printed on the back of every party membership card. Ding dong, Clause Four is dead as a dodo.


But I tell you what, my little Left-wing friends, and all you who think it amusing to break out the champagne at the death of an 87-year-old woman. There is one thing that is alive and well – and that is Thatcherism. Thatcherism lives; and will live as long as there are people in this country, and on this planet, who see how economic freedom can be the servant not just of the rich, but of our whole society.


There is something astonishing about our collective reaction to Margaret Thatcher’s death. It was sad, but hardly unexpected. Why has the controversy been so frenzied? Why can the papers seemingly think and talk of nothing else? Because we have been suddenly reminded of the clarity and urgency of what she had to say – and we have a guilty feeling that her lessons are being forgotten.


I love museums, and am of course thrilled to read in The Sunday Telegraph that we are going to have a Thatcher foundation and museum in London, world capital of culture. I expect that it will embrace the spirit of this country’s greatest post-war prime minister, and have touches that are both traditional and up-to-date. There will be plenty of old-fashioned glass-case displays of memorabilia.

You know: Scargill’s sweat-stained baseball cap; a Soviet tank of the kind she helped to send scuttling from Eastern Europe; the very milk bottles she snatched from the kiddies. I expect there will be the handbags and the gladrags and the deep cerulean-blue ballgowns, all of them tastefully displayed.


But this must be a technologically brilliant place as well, a museum for the PlayStation generation. So I hope that consultants will be brought in to devise the most sophisticated interactive computer games – in which you not only get to gawp at her clothes, but put yourself in her shoes. What we need is YouThatch, the game that tests whether you have the reflexes and the sheer cojones of the Dama de hierro.

It is no use just asking people to take the decisions that she took, though they were difficult enough. Do you take the hellish risk of fighting Galtieri and the repulsive Argentine junta? Do you continue to subsidise uneconomic coalmines? Do you side with Ronald Reagan and face down the Russkies? In all these dilemmas, her choice has been vindicated by history, and young people will (or so we must hope) know the right answer.

No, what we need is a computer program so cunning that it can work out – from her principles – what Maggie would do in situations she never faced. What, in other words, would Maggie do now? I can already see our budding Sir Politic Would-bes queuing to get their hands on the console, and then mouthing silently as they try to channel her breathy contralto, like Luke Skywalker receiving the astral guidance of the late Obi-Wan Kenobi.

How could we devise a piece of software that would correctly identify the Thatcherian course? It’s easy – you just have to recognise that Thatcherism wasn’t about exalting the rich and grinding the faces of the poor. It was the exact opposite. It was about unleashing talent, and bursting open cosy cartels, and helping people to make the most of their talents and their opportunities. So anyone wanting to work out what Maggie would do today should do whatever it is that helps people make their way in the world – and whatever helps Britain to make its way in the world, too.

As it happens, I think her record on education was far from perfect: she was so heavily engaged in hand-to-hand economic warfare that she did not focus as closely as she did on other dossiers – and if she closed fewer mines than Harold Wilson, it is also true that she closed more grammar schools than Shirley Williams.

But what would she do today? It is obvious. She would do anything to smash down the barriers that prevent talented young people from rising on sheer academic merit; and if the teaching unions had said that they were against narrative history – as they are – I think she would have made sure they became history themselves.

What would she do with the economy? She would do anything to help the small businesses that are the backbone of the nation, and to make it easier for them to take on new workers. She would swing that iron handbag at ’elf and safety and the deranged compensation culture. She would cut business rates, and she would tell the banks that they should either lend to British business or get broken up.

She would naturally keep good and strong relations with America, but she would build links way beyond Europe and the Atlantic – with the Brics, with the African countries that are now showing such amazing growth (many of them Commonwealth members) and with the Middle East. She would be more friendly with Germany these days, but in renegotiating the EU treaty she would make the basic point that sovereignty lies with Parliament, not with Berlin or Brussels.

And yes, as the builder of the last truly transformative piece of transport infrastructure – the Chunnel – I think she would use her fantastic will to cut the cackle and get this country the aviation capacity it needs. We wouldn’t even need to name the airport after her, because 23 years after she stepped down, and after her death, her ideas are still being exported to democracies around the world. Thatcherism lives! Ding dong!

Via www.telegraph.co.uk
Posted by Cllr Patrick Warner at 03:08