Credit rating agency Standard & Poor’s has reaffirmed the UK’s AAA status but warned growth will be weaker than expected for the next three years and any easing of the Government’s austerity programme could provoke a downgrade.

S&P is the only major rating agency not to have lowered the UK rating following Moody’s cut to AA1 — the first time since 1978 that Britain has lost its top-notch status.

Following last month’s Budget, Fitch revised the UK from “negative outlook” to “negative watch”, edging it closer to a full downgrade. S&P’s decision to leave the UK’s rating unchanged followed another torrid day in the markets after weak US jobs data reignited fears about the strength of the global recovery.

Britain’s index of blue-chip shares slumped almost 100 points, or 1.5pc, to close at 6,249.78, rounding off its worst week since February and leading declines across European bourses and Wall Street.

In a testing day on global stock markets, investors ditched shares and bought government bonds after recent signs of improvement in the US labour market ground to a halt.

US jobs growth fell in March to its weakest pace in nine months. The 88,000 positions created was less than half the 190,000 economists predicted. “The report will fan fears we will once again see a slowdown in job creation after a strong start to the year,” said Nigel Gault, an economist at IHS Global Insight.

Fears about weak growth were also picked up by S&P in its UK outlook. The agency said it expected the UK economy to expand more slowly than the Office for Budget Responsibility (OBR) predicted in the March Budget.

But S&P reaffirmed the UK rating because “the Government remains committed to implementing its fiscal programme, and has the ability and willingness to respond rapidly to economic challenges”.

It stressed the Chancellor could not afford to relax his £130bn austerity programme. “We could lower the ratings if we were to conclude that the pace and extent of fiscal consolidation has slowed beyond what we currently expect,” it said.

The agency also claimed that a major risk to both growth and the rating was David Cameron’s promised in-out referendum on the European Union, which could spook business, deter investment, and further delay the recovery.

S&P’s assumptions were based on the premise that “uncertainty regarding the outcome of a possible referendum on EU membership” would not affect corporate sentiment. It warned that one risk was “that our assumptions about investor confidence in UK-EU-eurozone relations do not hold”.

S&P has kept the UK on “negative outlook”, meaning it has “at least a one-in-three chance” of being downgraded in the next two years. It said weaker than expected growth could trigger a rating cut.

A Treasury spokesman said S&P’s warning “serves as a reminder that our country cannot afford to simply run away from our problems”.

On Wall Street, the Dow Jones dropped 0.8pc to 14,495.60, while the S&P 500 weakened 0.9pc to 1,546.42. Although most economists expect the US to have recorded growth of close to 3pc in the first quarter of the year, “we appear to be setting up for a nasty pullback in the second quarter”, said Chris Low, an economist at FTN Financial.

US officials warned on Friday that new Treasury Secretary Jack Lew will press European governments to step up their efforts to generate growth when he travels to the continent for the first time next week. 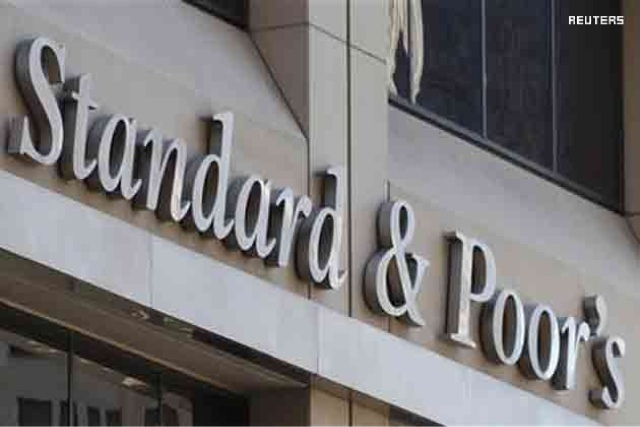 Posted by Cllr Patrick Warner at 15:09