Ed Miliband has met maverick Respect MP George Galloway, prompting a backlash from his own party.

The Labour leader invited Mr Galloway, a former Labour MP, to his House of Commons office for what was described by one source as an hour long “cordial and friendly conversation”. 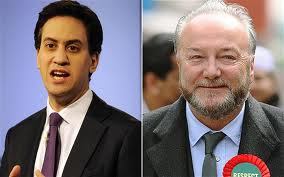 Mr Galloway was expelled from Labour a decade ago in a row about the role of British troops in Iraq.
Writing about the meeting on Twitter, the micro-blogging website, shadow Cabinet minister Ivan Lewis joked: "Re Galloway being allowed to join Labour,more chance of finding Lord Lucan riding Shergar! @Ed_Miliband abhors his values+divisive politics."
Mr Galloway replied: “Better not tell lies about the meeting Ivan. Or I will have to tell the whole truth...”.
The possibility of a rapprochement between the party’s hierarchy and Mr Galloway was criticised by some Labour MPs. One MP said: “It is political suicide to have anything to do with George Galloway.”
The meeting, which was held towards the end of last year, prompted suggestions that Mr Miliband was tempted to bring back Mr Galloway into the fold to give him an extra seat after the next general election, which is forecast to be close-run.

Labour tried to play down the meeting, after details emerged in a Sunday newspaper, insisting it was part of an attempt to reach out to other parties such as the Greens and Northern Irish parties ahead of a vote on MPs’ constituency boundaries.

A spokesman said: “There is no attempt to bring George Galloway back into the Labour Party as many of his views are unacceptable and extreme. Ed met him purely as a courtesy to discuss the recent vote on changing parliamentary boundaries. No communication has taken place since.”
Via www.telegraph.co.uk
Posted by Cllr Patrick Warner at 15:28