Iain Duncan Smith: I could live on £53 per week

Iain Duncan Smith has claimed he could live on £53 per week - the same amount as one benefit claimant said he survives on after rent and bills.

Iain Duncan Smith, the Work and Pensions Secretary, said it would be possible to live on so little, after a benefits claimant told the BBC he gets by on £53 per week after housing costs.

The senior Tory was put on the spot as he defended the need for billions of pounds in cuts to the welfare budget because of the country's "economic mess".

Labour has branded yesterday the start of "Black April" as a number of cuts and freezes in benefits and tax credits took effect on April 1.

However, Mr Duncan Smith criticised those who portray the changes as "attacking" and "slashing" benefits, arguing the Coalition is "reforming" the system to make it "fair".

Speaking on BBC Radio Four's Today programme, Mr Duncan Smith said limiting the rise in benefits to one per cent this year is a better deal than many people are getting in countries like Ireland and Portugal.

The MP, who earns £134,565 a year as a Cabinet minister, insisted he could live on £53 a week after a 51-year-old market trader told the BBC that he gets by on the meagre sum.

David Bennett said he earned around £2,700 last year - around £50 a week - and has had to borrow money after his housing benefit was cut to £57 a week.

It later emerged that Mr Bennett also gets tax credits, which can be worth between £37 and £50 from the Government. However, he is left with just £53 a week after paying rent and bills.

The current rate of jobseekers' allowance for unemployed people is up to £56.25 a week for people between the ages of 16 and 24, and up to £71 for an adult over that age.

Yesterday, more than 33,000 people signed an internet petition challenging the Work and Pensions Secretary to live on around the same amount as a young person on unemployment benefit.

"If I had to, I would," Mr Duncan Smith told the BBC. "The reality is what we are trying to make certain is that the amount of money that taxpayers pay sees some value at the end of it in terms of people being supported.

"There’s been a huge amount of money which, in the course of the welfare system now, has absolutely been wasted.”

The minister also admitted the overall welfare bill will carry on rising. Benefit payments to people of working age will fall to levels last seen in 2009 under the Labour Government by the end of this parliament.

However, total bill for all benefits and tax credits is forecast to carry on rising by billions a year well into the second half of the decade.

On Monday, Mr Duncan Smith and George Osborne, the Chancellor, told The Daily Telegraph that the Coalition is “restoring the original values of the welfare state”. 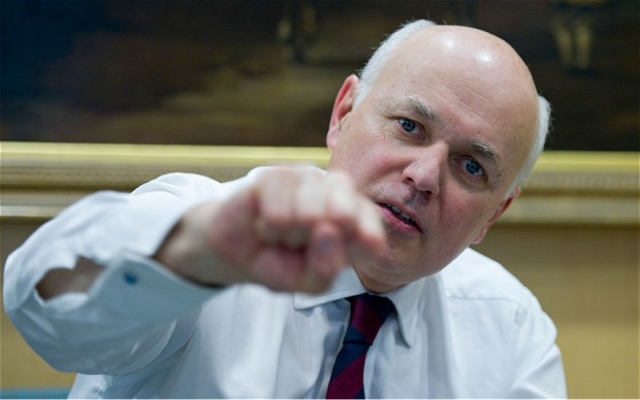