Local Residents and Politicians have been expressing dismay at the refusal of manderins at Eastbourne Town Hall to show respect to the memory of Lady Thatcher following her sad death earlier this week. This follows media coverage elsewhere in the country pointing to a host of other councils who have lowered their flags to half mast, including Green Party controlled Brighton & Hove City Council.

A statement was issued to Councillors advising them that protocol dictates that flags should only be flown at half mast in the event of the death of a member of the Royal Family unless instruction is received from the Queen to do otherwise.

One local resident vented his frustration on Facebook by recalling that the Council, which is run by Liberal Democrats can change the illumination of the Town Hall clock to pink in support of Gay Pride but could not lower the flag to half mast to show respect to a woman who regardless of one's political persuasions, had demonstrated huge commitment to the nation through her years of service to Britain.

Conservative Councillors have been calling on officers to lower the flag since Lady Thatcher's passing and the Chairman of Eastbourne Conservative Association, former Councillor Ian Lucas spoke on BBC Radio Sussex's Breakfast Show this morning calling for the flags to be lowered and these comments were sympathised with by the Town's Lib-Dem MP.

Upperton Councillor, Alun Cooke raised advice from the Flag Institute (provider of advice and assistance to the MoD, DCMS, DCLG, FCO, BBC and ITN amongst others) which reads 'Flags should be flown at half mast on the following occassions: E) The funerals of Prime Ministers and ex-Prime Ministers of the United Kingdom, subject to special commands fromthe Sovereign in each case'. 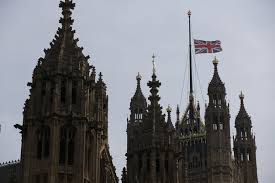 The Union Flag, lowered to half mast over the Houses of Parliament

I am pleased to report that instruction has now been issued by the Palace that flags should be lowered on the day of the funeral. Whilst a number of us would have liked to have seen this decision taken earlier I am pleased that formal guidance has now been issued and Eastbourne will join other towns and cities across the country in time for Lady Thatcher's funeral next Wednesday.
Posted by Cllr Patrick Warner at 09:56