900,000 choose to come off sickness benefit ahead of tests

Nearly 900,000 people who were on incapacity benefit dropped their claim to the payments rather than undergo a tough medical test, latest government figures show.

The 878,300 who decided not to have an official assessment of whether they were fit for work was more than a third of the total number of people claiming sickness-related benefits.

The statistics also revealed that some claimants cited conditions such as “blisters”, “sprains and strains” and “acne” as preventing them from having a job.

More than 46,120 people claimed incapacity benefit because of “behavioural disorders due to the use of alcohol” while 29,130 claimants cited drug use.

Ministers said the figures showed the full extent of how millions had been “trapped on welfare” for decades.

Grant Shapps, the Conservative Party chairman, said the old system was “evil” and accused Labour of using sickness benefits to “hide the unemployed” when the party was in power.

The statistics emerged ahead of a raft of controversial changes to the benefits system which will come into force this week - including the “bedroom tax” which sees council and social housing tenants facing reductions to their benefits if they have empty rooms in their homes.

Also coming in is an overall benefits “cap”, which will prevent any household receiving more than £26,000 a year in total benefit payments - a figure set to reflect the average gross salary of a full-time worker.

Labour say the average household will be £891 worse off in 2013-14 because of tax and benefits changes.

Iain Duncan Smith, the Work and Pensions Secretary, has faced criticism after scaling back a pilot scheme for his flagship universal credit - which will merge dozens of different out-of-work benefits into a single payment with the aim of ensuring an individual is always better off in work than on benefit.

Instead of being tested in four job centres, the new system will only be piloted in one from this week amid claims the new scheme is in chaos.

Mr Duncan Smith has admitted, as revealed by The Telegraph, that ministers have effectively given up trying to reduce the overall welfare bill and that the government is simply trying to “manage” the rise in payments.

Speaking in Scotland he said in “reality” Britain was “not cutting welfare” unlike other European nations.

Ministers will hit back in the row over welfare this week by publishing a raft of figures which they say show that tough measures - or the threat of them - are already “changing behaviour” by seeing people drop their claims.

These include the figures on incapacity benefit. As well as the 878,300 who chose to drop their claims, another 837,000 who did take the a medical test were found to be fit to work immediately, while a further 367,300 were judged able to some level of work.

Only 232,000 (one in eight of those tested) were classified by doctors to be too ill to do any sort of job.

Some 30 people claimed they were unfit to work because of blisters, while 60 cited acne and 2,110 said “sprains and strains” rendered them unfit for employment.

The vast majority of these have since dropped their claims or been found to be fit for work, according to the Department for Work and Pensions figures.

The assessments part of the Work Programme introduced by Mr Duncan Smith, a scheme costing up to £5 billion under which private-sector providers are paid to help the long-term unemployed find work.

More than 2 million people who previously claimed sickness payments are gradually being assessed to determine whether they are eligible for the main incapacity benefit, Employment and Support Allowance (ESA).

If they are not, and cannot find work, they have to claim the less generous Jobseekers Allowance (JSA).

Mr Shapps said: “One of the cruelest things about this welfare system, which had developed over decades...is that it traps people who want to work hard and get on in life with no other option but to be trapped into a life on welfare.

“It’s cruel, I think the system had actually become literally cruel, even evil to people. People suspected for a long time that incapacity benefit had been used by the previous government to hide the unemployed.

“This is a new figure, nearly a million people have come off incapacity benefit...before going for the test. They’ve taken themselves off. My big argument here is this is not these people were trying to play the system, as much as these people were forced into a system that played them.” 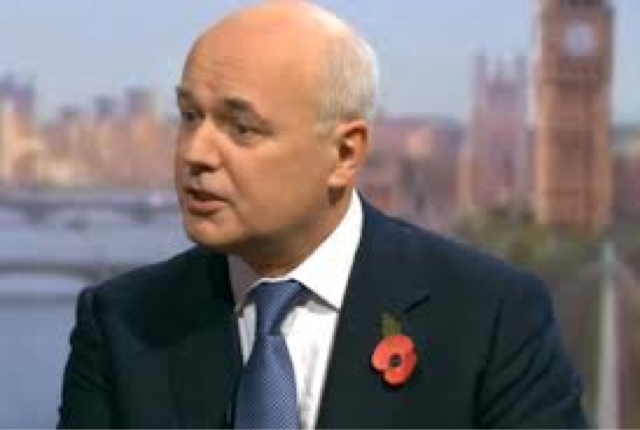 Posted by Cllr Patrick Warner at 07:01