Apprenticeships to be 'the new norm', says David Cameron

David Cameron has pledged to make apprenticeships the "new norm" for school leavers who decide against going to university. 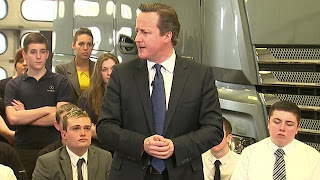 The prime minister said he wanted work-based training to sit "at the heart of our mission to rebuild the economy".

He used a visit to a training academy in Buckinghamshire to call on employers, educators and MPs to expand apprenticeship roles for young people.

Forecasts suggest apprentices could add up to £3.4bn a year in economic gains.

'Highly-skilled workforce'
Estimates from Whitehall suggest more than 500,000 people started an apprenticeship between 2011 and 2012.

The prime minister said such schemes gave school leavers "the chance to learn a trade to build their careers" and allowed the creation of "a truly world-class, highly skilled workforce that can compete and thrive in the fierce global race we are in".

He added: "Our drive to reform and strengthen apprenticeships, raising standards and making them more rigorous... means that an apprenticeship is increasingly seen as a first-choice career move.

"But we need to challenge ourselves to go even further. That is why I want it to be the new norm for young people to either go to university or into an apprenticeship.

"We need to look at how we can expand apprenticeship opportunities so that they are available to all young people who are ready and eager to take them up and aspire to get ahead in life."

Mr Cameron suggested the UK should emulate Germany, where the majority of teenagers either go to university or into an apprenticeship after they finish their exams.

His comments come as the Centre for Economics and Business Research predict that completed apprenticeships over the next 10 years could contribute up to £3.4bn a year to the UK economy through productivity gains by 2022.

The government is also expected to issue a formal response to the Richard Review - which has looked at ways to improve the quality of apprenticeships - later this week.
Posted by Cllr Patrick Warner at 10:00