This week’s two big political events have given us a chilling insight into what to expect if Labour wins the election in 2015.

Ed Miliband’s shameful reaction to the Budget and his support for state regulation of the Press proves that a government led by him would be motivated by spite, dishonesty and authoritarianism, despise democracy, and be utterly incompetent.

I suppose we shouldn’t be surprised that the son of a Marxist professor would rather we had newspapers like Pravda — instead of Britain’s robust and irreverent free Press that, yes, occasionally does bad things, but also does many very good things.

Mr Miliband’s prescription for statutory control of the Press comes straight from the pages of George Orwell’s terrifying novel 1984 where the Thought Police rule, as did the response to the Budget by Shadow Chancellor Ed Balls.

While pig-headedly refusing to accept his own huge share of responsibility for Britain’s dire economic mess, Mr Balls indulged in disgraceful scare-mongering about the Coalition’s proposals to kickstart the economy.

He claimed that the Government’s Help to Buy scheme (specifically designed to assist first-time buyers to get on the property ladder) would be hijacked by multi-millionaires using it as a ‘second-home subsidy’.

He also described the lowering of the 50p tax rate to 45p as ‘a tax cut for millionaires’, when the truth is that it affects anyone earning more than £150,000 a year — many of whom are not millionaires.

More importantly, it will actually raise more money for the Treasury by reducing tax avoidance.
I can reveal that former supporters of Tony Blair (who, in any case, would have preferred Mr Miliband’s elder brother, David, to lead the party) are increasingly worried about Labour’s direction.

They feel the party’s main spokesmen are short on talent and out of touch.

Also, they are disturbed that Ed Miliband’s close circle are instinctively authoritarian. Mostly former acolytes of the hapless Gordon Brown, they don’t seem to understand that free expression is the central pillar of a democratic society. The truth is that Mr Miliband became leader only because of the trade union block vote.

It’s not surprising, therefore, that he favours anti-democratic bodies and it explains why he is in thrall to the pressure group Hacked Off, a self-appointed cadre of Press-hating zealots accountable to no one, which helped dictate his Press regulation policy. This sinister mindset fits perfectly with the anti-democratic and authoritarian ambitions of those in Brussels who want to create a European super-state.

If, God help us, Mr Miliband ever became Prime Minister, we can be pretty sure he would disregard public opinion and the historic liberties and sovereignty of the British people. The way he and members of Hacked Off stitched up a shabby deal to crush Press freedom shows how far his Marxist authoritarianism has already advanced.

Although he was abetted by Nick Clegg on this occasion, the collapse of Tory support in many parts of the country suggests that Labour may not need any help from the Lib Dems to form a government after the next election.

Such is the strength of Blairites’ concerns about Messrs Miliband and Balls that I’m told that some would even prefer five more years of Mr Cameron in No 10. For they fear Mr Miliband could be so unpopular that Labour would be out of power for years after.

I suspect they are right. Clearly Mr Miliband wants something like a Ministry of Truth to ‘guide’ the Press, while Mr Balls would borrow incontinently and turn Britain into an economic basket-case like Greece. 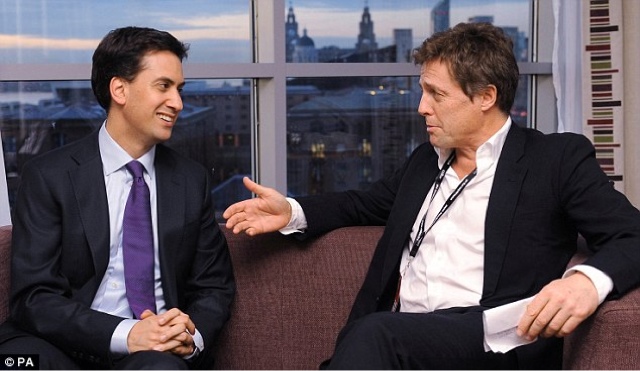 Posted by Cllr Patrick Warner at 14:27