Angelina Jolie shunned her Hollywood image and lifestyle as she met rape victims in Africa alongside William Hague today.

The 37-year-old was pictured visiting several different camps in the Democratic Republic of Congo.

Wearing a simple white shirt with black trousers, Jolie had her hair scraped back into a low ponytail and chose to wear no make-up as she sat with the British Foreign Secretary.

The 'Mr and Mrs Smith' star and Hague spent time at the Nzolo Internally Displaced Persons camp, north of Goma, as well as at the Lac Vert camp, which is on the edge of Goma.

Speaking about their mission to raise awareness of the issue on an international scale, Jolie told Sky News: “It's often that we speak about the drama and the pain and the horrors of the Congo but it's also a wonderful place with extraordinary people.

“The big message is that this initiative started by the Foreign Secretary is extraordinary, but what we're here to do is to try to scale it up and make this a worldwide focus.

“It's been going on in every war, every crisis and it's often an afterthought - and it's due time to end this, and put an end to impunity, and they deserve it.” 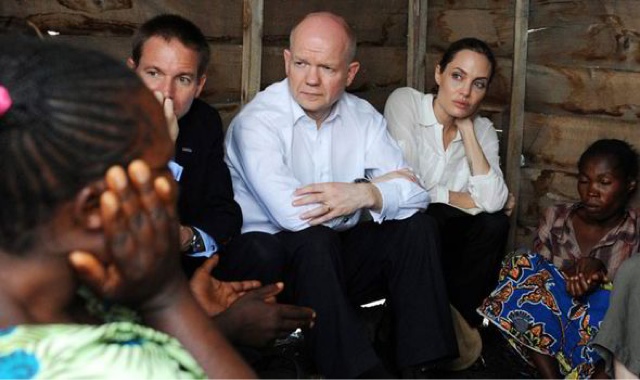 Posted by Cllr Patrick Warner at 15:51