MP Eric Joyce spent the night in the cells after an alleged drunken fracas at a Commons bar last night. 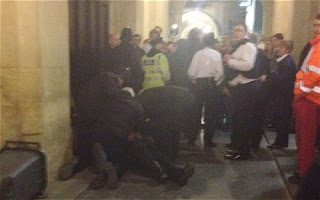 The former Labour stalwart, who is no stranger to controversy, was arrested and was still being held at a central London police station this morning.


The ex-soldier, who was suspended after public criticising the Armed Forces, is said to have wrestled with two police officers outside the Sports and Social Club bar at around 10.30pm before he was handcuffed and taken away in a police van.


The independent member for Falkirk is understood to have objected to a request not to take a drink outside the bar, which was hosting a karaoke evening.


One fellow drinker in the Sport and Social told the Daily Telegraph: "A single policeman was talking to Joyce. It looked like he was telling him off, saying, you are drunk and should leave. Eric starting pushing him.


“He started grappling him and his hat fell off. Another policeman ran over and pushed him to the floor.