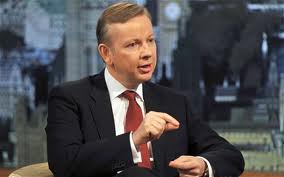 The first is for reducing his department's expenditure on propaganda - sorry, information - from £54m to £1m. This seems about the right amount, and should be set as a maximum for all other departments unless they have good reason to spend more, for example, on anti smoking campaigns. The government should also stop funding Labour's propaganda machine via charities. No government money given to a charity should be spent on advertising. Ever.

The second is for having the foresight, with Nick Gibb, to create 80,000 new school places between 2010 and 2012 to cope with rising demand and need, while Labour, despite its irresponsible immigration policies, had actually cut primary school places by 200,000. The source of these figures is the audit office, which also has a more reliable indicator of population growth than the census. Census returns can be fiddled, but it is harder to conceal births, which increased by 22% from 564,000 in 2001 to 684,000 in 2011. So, another caricature of Conservatives as the party of short-sighted cuts bites the dust - or at least does so as far as evidence is concerned.

If the select committee had not made itself look farcical in its questioning of Michael Gove on Wednesday, we might have had a third cheer. Ian Mearns MP's ill-informed bumbling and Bill Esterson MP's confusion of the Independent newspaper with the civil service were simply stupid. Alex Cunningham MP's nasty suggestion that that the permanent secretary was "trying to protect the secretary of state in some way" was flicked off the man's cheek like a fly. I had thought the "How was it for you?" session with reshuffled ministers last month was as bad as it could get, but I've no doubt worse is in store.


The educational war between progressives and Conservative reformers amounts to a conflict between philosophy and science. A C Grayling, interviewed over his new College of the Humanities, recommended A Biographical History of Philosophy, by George Eliot's paramour G H Lewes. It is a witty and illuminating work that shows just how personal was the world of the ancient philosophers, and how its rigour was shot through with what we would see as sheer nonsense. Ancient philosophy was, says Lewes, a forerunner of modern science, which he traces to the method devised by Francis Bacon at the beginning of the seventeenth century. Science, he argues, concerns itself with what it is possible to know, and philosophy with the essence of things.

For progressives, whose intellectual leaders were Thomas Dewey in the US and Richard Pring of the UK, "philosophy" is concerned with first principles. Virtually any point of view can be defended on this basis, as it is impossible to prove or disprove anything. For the UK Left, the key principle has been equality, which was inserted into the teachers' code of conduct by Labour's General Teaching Council. Against this "philosophy" we have the Conservative emphasis on evidence, in terms of advances in what children know, understand and can do. The two collide, and, where the principles of "philosophy" are threatened by evidence of underachievement, the Left disguises its weakness by fiddling examinations and grade boundaries.

The new scientific evidence comes from brain research, which shows how learning involves the development of neural networks that enable us to organise, retrieve and apply what we know. "The Learning Brain", (Blakemore and Frith) is a good introduction, and a series of books by Dr David Sousa, including How the Brain Learns Mathematics, examines the evidence in relation to different aspects of education.
This work is leading to a reassessment of the role of memory in thinking - a much more complex question than terms such as "rote learning" and "short term memory" suggest - and of assumptions about how thinking develops in people with various learning difficulties. For example, a leading specialist in memory wrote to me in the eighties that it was not possible for a person to improve their memory, while it is now accepted that it is indeed possible to help people with weaker memories to use them more effectively, which is much the same as improving their capacity.
Dr Matt Davis, of the Medical Research Council's Applied Psychology Unit in Cambridge describes in the Association for Language Learning's current journal how the areas of the brain concerned with spoken and written language are closely linked, and have some elements in common. This demolishes the notion that spoken and written language are separate skills, which progressives had been using as an excuse to ignore the written language more or less completely - "Modern Languages Achievement and Challenge" (HMI, 2011), notes that good work with reading is infrequent, and with writing rare.

The evidence remains patchy, and is based on physical observations that have to be interpreted in the light of the conditions under which it occurs. It is, however, changing the basis of our knowledge from external evidence, eg test results or observation of behaviour, to direct examination of the brain in operation, and hence of the physical aspect of thinking.
Arguments about education based on social class can provide correlations, which may or may not show cause and effect. The brain research gives us a window on what is actually happening, and how we can improve on it.
By John Bald via www.conservativehome.com
Posted by Cllr Patrick Warner at 05:58