British taxpayers do not owe immigrants a living through benefits, warns Cameron as he announces restricted access to health care and housing

Britain's benefits system is to be overhauled to end the idea that it will payout to anyone who moves here, David Cameron pledged today.

Housing, health and unemployment support will be restricted to people who have lived in the UK for several years or can prove they are entitled to state-funded help.

Mr Cameron used a major speech at University Campus Suffolk in Ipswich in Suffolk to promise to 'strengthen' tests to ensure only those who have paid into the system are able to receive handouts.

But the much-trailled crackdown was dismissed by critics who argued that many of the limits on benefits were already in place and the real fear for many in the UK was the threat posed to jobs by an influx of cheap labour.

Mr pledged to end end Britain’s ‘something for nothing’ reputation, although a more radical plan to ban new arrivals from claiming benefits at all in their first year was dropped for fear of breaching EU law.

Mr Cameron claimed net migration needs to ‘come down radically’ after getting ‘badly out of control’ under Labour.

He said: 'Right now the message through the benefit system is all wrong.

'It says if you can’t find a job or drop out of work early, the British taxpayer owes you a living for as long as you like no matter how little you have contributed to social security since you arrived.

'My view is simple. Ending the something for nothing culture needs to apply to immigration as well as welfare.'

The centrepiece of his reforms is a limit of six months on the right of EU nationals to claim out-of-work benefits.

From January, those who cannot show they are on the verge of securing a job will have their benefits stopped.

He said current regulations say that EU migrants cannot claim benefits after six months if they are not ‘genuinely seeking work and have a reasonable chance of being engaged’.

Mr Cameron said migrants can only claim after six months if ‘they can prove not just that you are genuinely seeking employment but also that you have a genuine chance of getting a job’.

Mr Bryant said: 'It’s exactly the same, isn’t it, there’s no difference at all, this isn’t a new announcement.'

The Prime Minister also unveiled a crackdown on so-called health tourism, with hospitals ordered to start charging foreign visitors. Those from outside the EU will need health insurance before being granted a visa.

There will be a major shake-up of council housing rules designed to keep immigrant families off waiting lists for at least two years and possibly as many as five.

Town halls will have to stop allowing migrants to jump the queue – last year around 32,000 of the 360,000 available council homes went to foreigners.

Mr Cameron said: 'New migrants should not expect to be given a home on arrival.

'And yet at present almost one in ten new social lettings go to foreign nationals.

'So I am going to introduce new statutory housing allocations guidance this spring to create a local residence test.

'This should mean that local people rightly get priority in the social housing system.

'And migrants will need to have lived here and contributed to this country for at least two years before they can qualify.'

The measures were described as ‘amongst the toughest in the world’ by immigration minister Mark Harper.

They are a response to public fears of an influx of thousands of migrants from Romania and Bulgaria when movement restrictions are lifted at the end of this year.

The Government is also anxious about growing support for the UK Independence Party, which has fed on concern about the impact of mass immigration.

There is nothing however in the proposals to stops migrants travelling here from the poorer parts of Eastern Europe.

The bid to cap eligibility for benefits to six months will put the Government on collision course with Brussels, which zealously guards the right to free movement across Europe.

Ministers will make the case that after six months migrants will have ‘exhausted’ their right to look for work in this country.

Sources say they are confident of winning an expected legal challenge at the European Court of Justice.

The Government will also seek to close a loophole which enables illegal over-stayers to continue claiming benefits when their visas expire.

And ministers will try to toughen up the rules on the habitual residency test which governs how quickly migrants can start claiming in-work benefits such as tax credits. 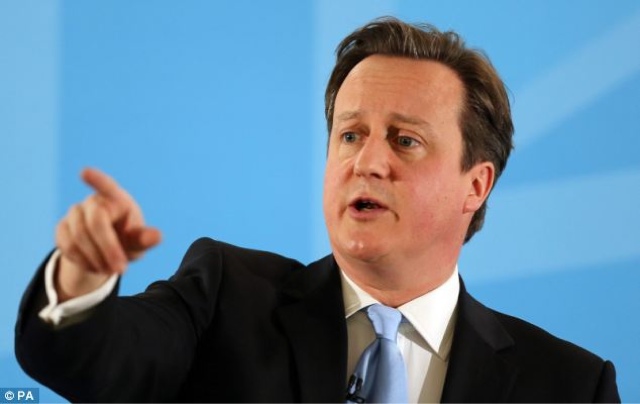