Extreme weather conditions have severely affected the road network across East Sussex over the last 36 to 48 hours – but the County Council's fleet of gritters are working non-stop to try and clear primary routes. 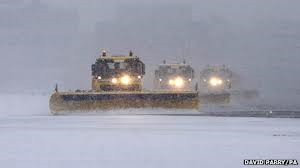 That's the message from Highway chiefs as they work to clear the county's strategic road network of snow and ice.

Roger Wiliams, Head of Highways at the County Council said: “Our gritting crews have been working around the clock for the last 36 hours – 48 hours. They've been out all night gritting and ploughing the primary routes and we've put down nearly 2,000 tonnes of salt in the last 24 hours – 1,000 of this during the night, when we would expect to use about 150 tonnes on a normal frosty night.

“Grit isn't a magic fix. It takes time to work and in extreme temperatures even grit won't prevent snow or ice from settling. When we put grit down, traffic needs to move over it to make it work properly.

“A combination of a lot of snow falling in a short space of time and heavy slow-moving rush-hour traffic means grit isn't able to do its job as effectively. Once traffic is queuing, gritters struggle to reach the problem areas.

“Our gritters were out again on all routes this morning. We've been monitoring the situation throughout the day and as temperatures have risen we've seen more roads starting to clear. However, temperatures overnight are due to fall again so people should take extreme care if they have to travel.”

County Council Gritter driver Pat Wickham said: “It's been a long 36 hours and a bit dicey at times but we're pleased that we've helped to get the main routes moving again.”

You can keep up-to-date with the latest on how the weather is affecting roads and other council services by visiting our website at www.eastsussex.gov.uk/alerts or follow us on Twitter @EastSussexCC and @ESCCroads.
Posted by Cllr Patrick Warner at 09:53