BBC coverage of Radio & TV reporting of the A27 campaign

Businesses and politicians want to revive a campaign to improve the A27 near Lewes to save lives and commerce. 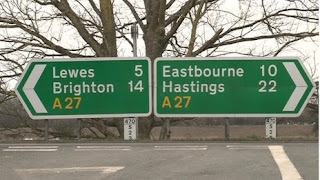 Eastbourne councillor Patrick Warner has launched an online petition, urging the government to upgrade the notorious 12-mile stretch of road.

He says Eastbourne and the adjacent towns and villages are isolated by the poor road links, restricting their potential for growth.

Lewes MP and Transport Minister Norman Baker said it would be too expensive and damage the environment.

Plans to widen the key route, which runs parallel with the south coast as far as Southampton, were dropped after a change of government in 1997.

Cllr Warner wants them reinstated to ensure business and tourism in south-east Sussex can grow.

He said: "We've had a huge delay, and that's continued to cost lives, cause congestion and stifle business growth."

Taxi driver Doug Thorogood, a member of the Federation of Small Businesses, said: "If small businesses can't get their delivery on time, then their customers are likely to go to somebody else and buy from them."

Mr Baker said: "The cost would be absolutely enormous, way in excess, probably, of £200m. And secondly, it would go through very special countryside."

The Department for Transport has not ruled out the prospect in the future, saying it recognised the economic importance of the A27 and would "take into account local views when considering possible future proposals".

A more detailed blog post will follow later today providing a wider selection of comments from local people who took part in the Radio Sussex debate during the Neil Pringle Breakfast Show.

Posted by Cllr Patrick Warner at 03:43